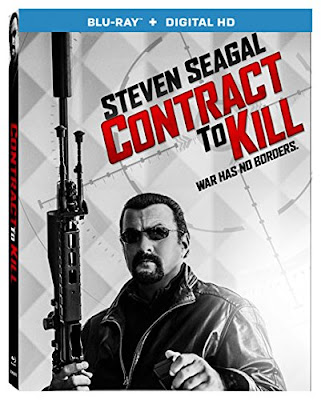 The narratives for these atrocious and unwatchable films are nearly always far too convoluted, leaving little time for badly choreographed and sloppily shot action sequences. And they nearly all take place in foreign countries, presumably to save money while pretending the international cast and narrative is anything but silly and derivative. In this latest embarrassment, Seagal plays a CIA/DEA enforcer named Harmon, though he is really just another ridiculously well-dressed (Does Seagal just do these films to steal the wardrobe?) hired professional, who is so good at his job that we never see him do much of anything.

Harmon is investigating terrorists who were captured in Mexico, bringing him to a complicated plot involving Islamic extremists in Istanbul, playing out like equal part right-wing fantasy and nightmare. In order to prevent a terrorist attack against America (despite none of the film taking place in the U.S.), Harmon plays the villains against each other with a logic-free plan, though it inevitably comes down to a lackluster battle. Before they discover him, however, Harmon is able to use an extremely noticeable tactics to infiltrate their operation.

Among these tools is an operative whose only purpose for much of the film is to fly a flashy looking drone near the hotel windows of the bad guys, noisily and flashily spying on important conversations that are conveniently played to open windows. Harmon also brings along a female operative named Zara Hayek (Jemma Dallender), who is about as discreet as you would expect a well-dressed model to be in this situation, especially when she uses her cell phone to film the terrorists inexplicably having a public conversation in the middle of a hotel lobby. After an uncomfortable sex scene with Seagal getting far handsier than is normal in any professional film setting, it becomes painfully clear why Dallender was cast, despite looking 10-years too young to be in this profession, 20-years too young to be paired with Seagal, and 30-pounds too light to achieve any of the fight scenes portrayed in the film. As if these films aren’t offensively bad enough, it feels like you are watching a young actress literally exploit herself and her youth for the sake of Seagal’s ego and creepiness. He has more direct contact in this brief sex scene than in all of the choreographed fight scenes of the film.

It probably goes without saying that the acting in this movie is questionable, at best. Along with a teenage model pretending to be a professional spy, all of the bad guys struggle just to speak English convincingly, because the filmmaker must know that his audience base won’t be bothered with the task of reading subtitles. It feels as though everyone that was cast in this film is simply a friend of the filmmaker, or the cheapest possible option while shooting on location in Romania. Only slightly more believable than the acting is the special effects utilized in the film, though many shots are re-used several times over the course of the film. Not only is it lazy, but it aggressively insults the intelligence of its viewers, all but assuming that they must not be paying attention to this drivel.

The Blu-ray release does nothing to enhance the shittiness of the filmmaking, though it does come with a Digital HD copy of the movie. This might be useful for those who would rather watch this movie on their cell phones. I’m sure it wouldn’t make it any worse than it already is. The special features on the disc include a generic making-of featurette and a trailer gallery.