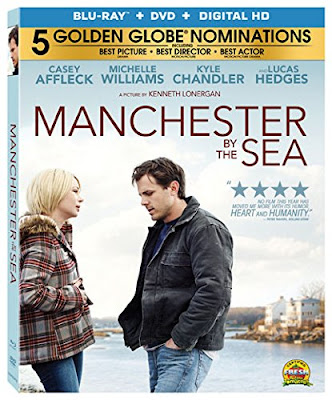 What we know from the trailer (and all I will divulge, for those yet to have seen the movie), is that this is a movie about a loner named Lee Chandler (Casey Affleck) who returns to his hometown to look after his teenage nephew, Patrick (Lucas Hedges), after the sudden death of his brother (Kyle Chandler). The trailer makes it clear that Lee prefers to move back to Boston with his nephew, where he makes a meager living as a janitor, whereas the 16-year-old sex-obsessed Patrick prefers to stay in his hometown. There are hints that Lee has a troubled past involving his ex-wife (Michelle Williams) that he would rather avoid, but the trailer mostly depicts comical bickering between nephew and uncle.

While the trailer focuses on the slight humor in the well-written banter from Kenneth Lonergan’s screenplay, it completely ignores the depressing tone a majority of the film adopts and misleads the audiences into thinking this may be an uplifting narrative. I felt good about nothing watching this film, which some have even resorted to calling “grief porn.” That is not to say that it is a bad film, but merely one that made me feel manipulated by the marketing department in order to increase ticket sales.
Looking past the misrepresentation of marketing, there is a great deal to praise within Lonergan’s film. Although there are many commendable moments as director, Lonergan’s movie excels because of the writing. The no-frills approach to dialogue feels honest and raw, giving most of the actors endless opportunities to excel in their craft. It is also a screenplay bold enough to refrain from typical resolution, easy answers, or the desire to appease audiences. This can be frustrating, but it also feels undeniably real, which I predict will result in an Oscar for screenwriting.

Much of the rawness comes from some of the performances. Casey Affleck is obviously at the forefront of this as the mostly silent Lee, with a non-chronological narrative to slowly reveal the reasons behind his reclusive behavior. Even though I was able to anticipate where the film was going, I still found the approach to be masterful. Unfortunately, rather than delving completely into the mindset of Lee, much of the film is about the conflict of having someone like him forced to be around someone like Patrick.

Both Lee and Patrick are somewhat selfish in the way that they handle grief, though they each have different approaches. Lee prefers silence and solitude, whereas Patrick is mostly just concerned with having sex with two girlfriends (neither of which know about each other), and being able to maintain those relationships after the death of his father. I know that Lonergan’s ultimate effort was to depict real behavior in the face of grief, but Patrick’s concern with having sex the night of his father’s death is too unsympathetic to ignore. He then proceeds to use his uncle as a wing man in order to have sex with his other girlfriend, all while whining incessantly about not wanting to move to Boston. I realize that Patrick is a 16-year-old boy, a naturally self-absorbed creature, but I found him to be horrendously unsympathetic, regardless of his later scenes of grief-stricken panic attacks.

Unfortunately, it wasn’t just the portrayal of the character that I found obnoxious. Despite an Academy Award nomination, I found Hedges to be rather unbearable in the role. This may have been a directorial choice, but the teen rarely seemed to be thinking about the lines being said to him as he recited the quick banter of the dialogue. Hedges constantly steps on the lines delivered by Affleck in the scenes of them arguing. This may have been a stylistic choice, but it never appears as though Patrick is thinking about what is being said or what he is saying in response. It feels like an actor who has memorized his lines really well and knows how to respond without ever needing to hear what is being said. Acting is also reacting, and Hedges does very little of this throughout the film.

The reason that I am guessing that the line stepping was a directorial choice is because of one crucial scene between Affleck and Williams in which they do the same. The difference in this scene shows why it doesn’t work with Hedges, both because of the talent displayed by the actors and a logical explanation to give the speech patterns context. The conversation between Lee and his ex-wife is obviously one that each has thought about for many years, and so it is far easier to believe that they are able to anticipate what the other is going to say even before the sentence has completely left their mouth.

On top of that, Williams and Affleck give two of the best performances of the year in this brief scene. There are layers of emotions and dozens of micro-expressions in each delivery of their lines, so that there is no question that they are reacting to what the other person is saying. Never once in this scene did I question whether the characters were thinking about what they were saying, or feel like they were just reciting lines. Williams and Affleck embodied these roles and there is an ocean-sized depth of emotion beneath the mere words spoken. This is what screen acting should look like, and it made me wish more of the film was focused on these characters rather than the unsavory and selfish sex life of a teenage boy. There would be no film without Patrick, but ironically, I would have loved this film if it weren’t for Patrick.

The Blu-ray release of Manchester by the Sea also comes with a DVD and a Digital HD copy of the film, so that there are multiple ways to dwell in the grief. The special features on the disc are far less impressive, though at least there is a focus on quality over quantity. There is a commentary track with Lonergan, oddly listed as a conversation with the filmmaker. There is also a making-of featurette, but it is a generic promotional tool rather than anything in-depth. The last of the special features are a couple of deleted scenes, making up just over five minutes of actual content.