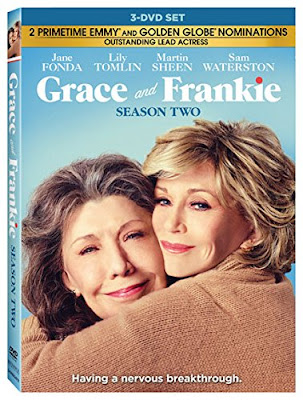 The first season of the series focused on the unlikely friendship of odd couple friends, Grace Hanson (Jane Fonda) and Frankie Bergstein (Lily Tomlin), after they bond over the discovery that their husbands have been secretly in a love affair for much of their marriages. When Sol (Sam Waterston) and Robert (Martin Sheen) come out of the closet and announce their intentions to marry each other, Grace and Frankie become unwilling allies. Despite Grace being a socialite and Frankie an overgrown hippie, the pair commiserate over their mutual feelings of betrayal. Season one was all about them coming to terms with the end of their marriages and finding a way to get along with each other, despite previously only being friends to appease their husbands.

By season two, Grace and Frankie are already friends and are mostly adjusted to their former husbands’ new lifestyles, so they show must find new areas of interest. The primary drama at the beginning of the season shifts focus to Sol and Robert, especially when Sol reveals that he cheated on Robert with Frankie. This sounds like a hypocritical piece of melodrama, but it is one that puts their relationship on the rocks for a lengthy portion of the second season. This drama is compounded by the planning of Sol and Robert’s wedding. With Grace and Frankie finally moving on, the show must find other things for them to do.

For Grace, this involves a past lover (Sam Elliott) who she tracks down in order to move on with her love life. She also attempts to revive friendships with her country club friends, despite growing accustomed to Frankie’s unfiltered personality. Even though they didn’t get along prior to the first season, there is also a mutual friend of Grace and Frankie’s (played by Estelle Parsons) that appears with some unfortunate news at the end of the season. This bit feels a bit contrived, but gives the show emotional impact in the final episodes. Frankie also tries to find purpose in her life by mentoring a young woman that she sees a bit of herself in, though this is another storyline that never really seems to go anywhere.

Frankie also has a romantic interest, though it comes out of her business aspirations. Having developed an all-natural lubricant out of yams, she develops a friendship with a yam farmer named Jacob (Ernie Hudson) who wants to be more than business partners. Frankie also becomes entangled in plans to mass produce the lubricant with Grace’s daughter (June Diane Raphael), who changes the recipe against all of Frankie’s protests. Grace’s other daughter (Brooklyn Decker) and Frankie’s two sons (Ethan Embry and Baron Vaughn) also dominate the season with their own storylines involving additional secrets and revelations. It has gotten to the point where the title characters are only a portion of the ensemble, leaving me to wonder where else the show can go in the third season without adding more unrelated narratives.

The DVD release includes all 13 season two episodes on 3 discs. The only special feature is a gag reel, which is admittedly amusing with so many legendary actors attached to this series.