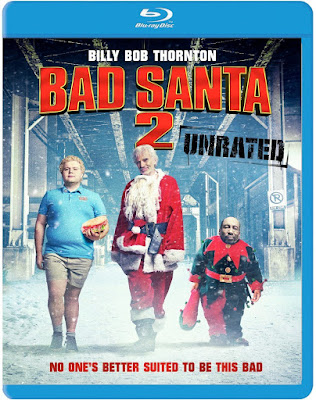 All of the elements that made the first film a success are back, but somehow feel far less effective this time around. Perhaps it is simply the law of diminishing returns; these same raunchy jokes aren’t as funny because the shock value has worn off over the 13 years since the original’s release. Or maybe it simply tries too hard to catch lightening in a bottle. There is obvious effort to recapture the effect of the original, bringing back key cast members and character arcs, while also piling on more name actors to increase the appeal. Then there is the fact that audiences have grown since the original release, demanding more than a cookie-cutter imitation of a decade-old cult hit. Whatever the reason, Bad Santa 2 feels more like leftovers than a holiday feast.

In order to repeat the formula from the first film, much of the happy ending must be reversed. We don’t want to see a reformed and happy Willie Soke (Billy Bob Thornton), so not much remains the same as it was at the end of the first film. Lauren Graham is the only main cast member not to return, and that makes sense anyway. Without a convincing relationship to ground him, Willie can go back to being a drunken mess. Even a continued friendship with Thurman Merman (Brett Kelly) can’t keep him in check, especially since the screenwriters don’t allow the former child character to advance intellectually beyond the point he was at 13 years ago. Kelly was even forced to gain weight to play the role again, so that even his physical appearance appears to be in arrested development.

The biggest change (or lack thereof) comes with the return of Marcus Skidmore (Tony Cox), who was imprisoned after backstabbing Willie during the heist in the first film. Not only does Marcus return for the sequel, a preposterous plot development has Willie pairing with him for another job, despite having attempted to kill him in the first film. This unlikely decision is explained by the inclusion of Willie’s mother in the plan. It turns out that the apple didn’t fall far from the tree, with Kathy Bates trying to out-do Thornton with raunchy dialogue as Sunny Soke. These three make plans to steal millions in money from a charity, which first requires Willie to infiltrate it by dressing as Santa Claus once again.

As Willie’s libido is nearly a character of its own, Lauren Graham’s character was quickly replaced with another lust interest. Diane Hastings (Christina Hendricks) is a woman in charge of the charity, who just happens to have a cheating husband (Ryan Hansen) and a propensity for demeaning sex. This is ideal for Willie, though it offers little for the plot and doesn’t make use of the actress’ assets beyond the physical. Once again, this just feels like the screenwriters copying what worked in the original film, ignoring the fact that creativity and originality was part of the charm. Bad Santa was unique as a raunchy holiday film, but Bad Santa 2 comes on the heels of several other adult Christmas narratives (including Office Christmas Party and last year’s The Night Before), not to mention the derivative elements it steals from its own franchise.

The Blu-ray release includes both the theatrical and unrated versions of the film, though the three minutes of variation in the cuts feels miniscule at best. The special features also dwell on the deplorable rather than any meaningful content. Many of the features don’t even serve a purpose beyond being offensive. “Just Your Average Red Band Featurette” is simply a collection of offensive moments from the film, “Jingle Balls” is a predictable re-imagining of the classic holiday song, and “That’s My Willie” is a crudely drawn animated “series” that is only actually about four minutes long. There is also additional footage, including deleted scenes, alternate scenes, and a gag reel, allowing for at least one more anal sex joke that wasn’t in either the theatrical or unrated cut. The last featurette looks at the changes to Thurman’s character from a cute (albeit dumb) child in the first film, to a clearly mentally handicapped young adult in this sequel.