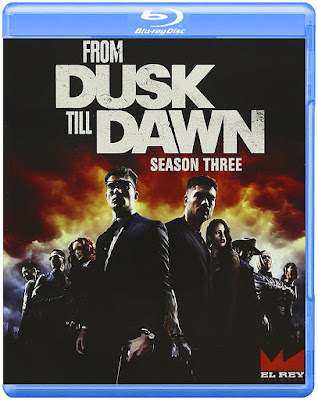 Reuniting brothers, Seth (D.J. Cotrona) and Richie (Zane Holtz), after putting them on opposite sides last season, the narrative develops new enemies and new goals for the criminal/vampire siblings. Old enemies become allies in an effort to stop another demon trying to take control. There always seems to be another ancient figure with secret powers, and that tired trope is only saved by an increase in both action and horror elements in the third season. This is possible with the show’s willingness to kill off significant characters, even more than they bring characters back to life with the changing rules of the culebra.

The increasing number of creatures in this narrative can become difficult to follow. Or maybe it is just my lack of interest in the specifics that made it hard for me to pay attention. But the one thing that this season does get right is the action, even containing some standalone episodes that are among the best in the series, even including season one. When the horror or the action takes precedence over the convoluted narrative with too many characters and too many conflicting goals, this show thrives. Ultimately, this is a show about attitude more than logic, so it becomes bogged down when the storyline is the focus. This is both a compliment to the style of the show and an insult to the storyline. Even the addition of an original cast member from the 1996 film is not able to save the show from often feeling like it is going nowhere fast.

The first half of the season seems dedicated to adding new creatures with unique abilities, nearly adopting the “freak-of-the-week” structure that many lazy superhero shows utilize. But when the show wraps up with a classic western showdown in an outdated looking town, it almost feels like The Magnificent Seven with vampires. Had there been more of this and less of the useless dialogue and demon backstabbing, I might even be looking forward to a fourth season. As it stands, this feels like a fitting end to a somewhat unnecessary series.

The Blu-ray release of season three includes all 10 episodes on 3 discs. The special features are plentiful in the release, with a number of promotional featurettes about the various characters and creatures. There are also audio commentaries and a deleted scene included. Even though this show is not nearly as good as many others on television (or streaming), the special features seem to be arguing otherwise.