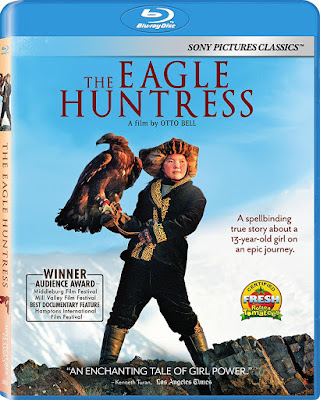 By the age of 13, when the documentary joins her on the journey, Aisholpan had already been hunting with her father’s eagle. This film focuses on her own eagle, beginning with the mission to capture a young eagle from its nest to be trained. This bird becomes Aisholpan’s, and is the one that she eventually teaches to hunt over the course of the film. The Eagle Huntress is split up into sections, with the final accomplishment being a successful hunting trip with the new bird in the Mongolian steppe. Prior to that, Aisholpan achieves credibility through competition in the Golden Eagle Festival, shocking other participants with her gender and her age.

Filmmaker Otto Bell takes the opportunity to use this narrative as feminist inspiration, even going so far as to have Daisy Ridley add a bit of unnecessary narration and hiring Sia to record an original song with lyrics that are more than little on-the-nose (albeit undeniably catchy). In order to emphasis this point, and perhaps to increase the perception of adversity Aisholpan was forced to face, Bell also includes interviews with a handful of elder eagle hunters expressing skepticism about the strength of a woman to perform these tasks. This would be an easy portion of the film to criticize as being biased in the message being conveyed, but there is far more to The Eagle Huntress. Even more significant than gender issues is the depiction of the Kazakh family traditions. Aisholpan is the first female in twelve generations to be an eagle hunter, but this film is just as interested in that tradition as it is her gender.

In many ways, it doesn’t even matter if elements of this film were staged. Not only does it have little impact on the narrative whether the scenes were staged or captured with cinéma vérité realism, this is far from a new technique for documentary filmmaking. Many will point to recent documentaries that were exposed as having altered content in order to make a more compelling film, movies like King of Kong or nearly anything to come from DisneyNature. But the reality is that a certain level of fabrication and staging has been a part of documentary filmmaking since the very beginning. The first American documentary feature, Nanook of the North (1922) famously recreated sequences of Inuit practices in the Arctic Circle. Some may see this as reason to dismiss The Eagle Huntress, but I just see it as a continuation of artistic traditions. And regardless of whether or not sequences were staged, Aisholpan has a bright smile that is infectious on camera and demeanor that cannot be staged.

The special features on the Blu-ray for The Eagle Huntress include an insightful commentary track from Otto Bell, as well as a making-of featurette that is just over 10-minutes long. Both of these extras seem a bit too over-preoccupied with the inclusion of Star Wars actress Daisy Ridley in the project, despite the fact that her contribution seems minimal. The real star of the film is Aisholpan and the magnificent setting, both of which shine in the high definition presentation of the film. Staged or not, the photography in this film is breathtaking, and absolutely worth seeing in high definition.