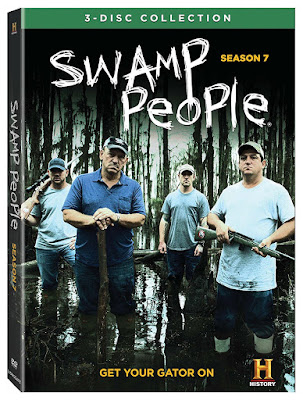 Whether it is dedication or compulsively obsessive behavior, I don’t ever like to join a series anywhere but the beginning. Even when reviewing a title such as “Swamp People,” a reality TV show with little continuous narrative from one season to the next, I prefer to have that contextual background before forming an opinion. I am spoiled with the wealth of options when it comes to finding old seasons of a show online through streaming services, but I was forced to enter the seventh season of “Swamp People” completely blind. By the end of the first episode, it was quite clear that all I was likely to have missed was six seasons of the same material, just as one episode is indistinguishable from another in season seven.

Let me be clear; I watched all 13 season seven episodes, and I was inexplicably addicted even when I was aware that it was terrible TV. What makes it so bad? For one thing, the series is horribly repetitious. Though it is called “Swamp People,” nearly every person that the documentary crew follows around is involved in the practice of alligator hunting. For many of the show’s participants, this is a family practice, a way of making supplemental income during the alligator hunting season each year. In that sense, this show is no different than “The Deadliest Catch,” or any other number of shows that focus on a unique job. But it is only unique for the first couple of episodes, and then the show is just business as usual.

I kept expecting something to happen which would alter the monotonous repetitious of the show, but there was little other than a few minor changes in the human dynamic. At times it seems as though they are just catching the same alligators over and over again, because no matter how hard the editors try and amp up the suspense with misleading commercial breaks, it almost always ends exactly the same way. It isn’t that I wanted the hunters to get injured or to lose their catch, but it just never really feels like much of a fair fight between man and beast. The only excitement comes with the size of each gator that is caught.

I suppose the other part of the show is the people, and they certainly are unique individuals. There are many father/son teams, a couple pairs of friends, and even a solo hunter, but the main focus seems to remain on Troy Landry and his family. I’m sure specific characters returning will mean more to fans that have followed the show through the seasons, though I had nothing invested beyond mild amusement over their oddities. One participant hunts with his son and grandson, who he calls “Dad” and “Pop.” Apparently he was so excited to be a father that it never occurred to him that giving them the title he was proud of was a weird choice. Then there is the interracial hunting team that brings salt and pepper shakers with them, as some kind of strange symbolic ritual to let people know how uncommon it is for a black man and a white man to work together in the south.

Perhaps I am being too harsh on this show, but even knowing how ridiculous much of the content was, I somehow could not stop myself from continuing to watch. Those who are adverse to the idea of watching animals being brutally hunted would be wise to avoid this show, even with all of the efforts from the History Channel to avoid actually showing the kill shots. Instead, there is a generic slow-motion shot included during that moment, showing the water from the shotgun blast spray up instead.

The 3-disc DVD collection contains all thirteen episodes from season seven, as well as a surprising collection of extras. There is plenty of additional footage which was not aired on television, as well as some featurettes with more interviews from the cast of real swamp-dwellers. It is more content likely to appease the fans, while boring anyone not already interested in the show.