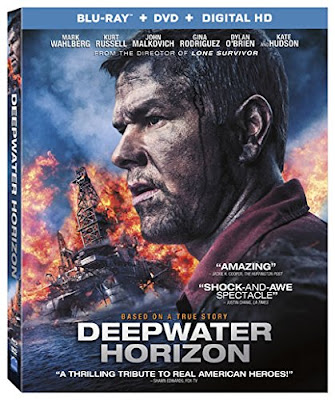 Simplicity has worked for Berg in the past, and it seems to be his narrative tactic in Deepwater Horizon as well. There is not much plot beyond the tragic event, and we only truly get to know a handful of the characters that we spend the running time with. At the forefront is Mike Williams (Wahlberg), Chief Electrical Engineer on the Deepwater Horizon oil rig. We know more about Mike than any other character, given glimpses into his home life as the oil man explains his job to his young daughter for her school presentation and has an early morning rendezvous with his wife (Kate Hudson) before departing for work. We are also given a brief scene of home life for Andreas Fleytas (Gina Rodriguez), though the significance of her character isn’t clear until becoming crucial to a few moments of suspense during the disaster.

Superintendent Jimmy Harrell (Kurt Russell) is given no back-story, though he may be of more significance than even Wahlberg’s character, if only because he adds whatever little message the narrative has. Once the disaster begins, this film is little more than a thrill ride. As he did with Lone Survivor, Berg proves capable of making audiences squirm as characters endure injuries, focusing on pain and mutilation of bodies. This is incredibly intense, but it serves a duel purpose as a distraction from the fact that there isn’t much to this story beyond the filming of the tragic mistake as a cinematic spectacle. Only a collection of scenes prior to the disaster involve Harrell scolding BP oil executives (one of which is played by John Malkovitch) for their decision to skip important safety tests in order to save the company money.

The condemnation of the company’s preoccupation with profit over the lives of their employees is a theme at the center of Deepwater Horizon, though this righteous anger has nowhere to go within this narrative. Frustrating as the details involving the disaster are, the screenplay doesn’t know what to do with that righteous anger. All Berg can do is make a few of the participants look shameful, while the victims of the company’s greed are fittingly portrayed as heroic. Even if the spectacle of the tragedy is undeniably riveting, I couldn’t help but wonder what the point of the film was by the time the credits were rolling.

Though the film seems to lack the depth that the material desperately longs for, the spectacle is embraced in the Blu-ray release of the film. The high definition and surround sound audio makes it clear that the movie works best in its moments of action. The special features, on the other hand, seem to be more preoccupied with filling in the historical background that is missing from the narrative. Exclusive to the Blu-ray is a 5-part hour-long feature with interviews from both the actors and the real-life survivors of the tragedy. Also exclusive to the Blu-ray is a featurette about Berg’s direction, with interviews from key cast members. Included on both the DVD and Blu-ray are three additional featurettes; one focuses on the stunts and the massive oil rig built as the set, another provides raw footage from some of the sequences in the movie, and the last provides additional stories of heroism from the workers on the rig. The set also comes with a DVD and Digital HD copy of the film.

** I must warn consumers that Deepwater Horizon digital copies have yet to show up on several of the streaming services (specifically Flixter Video, which seems to be falling apart) connected with Ultraviolet. You may be paying for a digital copy that you will never receive. If that is important to you, I suggest double checking its availability on your chosen streaming service before spending money on this release. Hopefully studios/Ultraviolet will soon take notice of these shortcomings and take action.