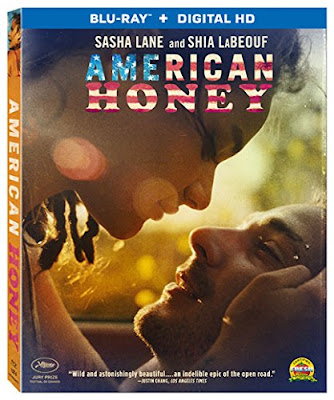 British filmmaker Andrea Arnold has previously enjoyed reveling in the squalor of lower class British society, most notably with the similarly light on plot coming-of-age narrative, Fish Tank. Though the country and characters may have changed, American Honey seems to prove that Arnold’s interests have shifted little. We are introduced to our protagonist, Star (Sasha Lane), existing in such a depressingly cliché-riddled situation that her escape is welcomed just for a change in the narrative. Dumpster diving to feed her appropriately dirty-faced younger siblings and forced to endure the sexual advances of her step-father of sorts, Star skips town to work with a traveling magazine crew.

This group of social misfits and emotionally damaged teens go door-to-door in each town, selling magazine subscriptions by any lie necessary. They are led by a cold-hearted entrepreneur (Riley Keough, granddaughter of Elvis Presley) not much older than Star, though she is drawn to the group by the top seller, Jake (Shia LaBeouf). As much as this film tries to be about the realism of their situation and each Midwestern location that they visit, it is essentially just a clumsy romance between Star and Jake, endless scenes of hooking up and petty jealousies. All of the rest of the scenes are basically just setting up the atmosphere, which includes endless shots of the crew driving from location to location while listening to their favorite songs and smoking weed.

With the film’s dedication to realism, I have no doubt that the cast actually spent much of their time filming actually getting drunk and high onscreen. So we are essentially just watching a group of immature amateur actors being paid to engage in self destructive behavior on the road trip that was the film shoot. This footage may have seemed like a really entertaining idea for those under the influence of these substances, but it quickly becomes redundant and increasingly contrived within a nearly 3-hour run-time. Each moment of realism is countered by the feeling that cinéma vérité is just a replacement for an actual screenplay or a clear message to be made by the material. I didn’t mind the aimlessness of the narrative until reaching the conclusion of the film and realizing that the filmmaker had no more sense of where the story was headed than I did.

Even if the journey was compelling, the end result was ultimately a letdown once it was clear that there was never a clear destination. Rather than concluding, the narrative just seems to end. It is one thing to allow your actors (or non-actors, as is mostly the case with this film) the freedom to improvise, but American Honey allows this method to take over the film to the point of overindulgence. There could easily be an hour of footage trimmed just by removing scenes of the young adults singing along to heavy-bass rap songs and getting intoxicated. The problem is that would also likely destroy the only thing original about the movie, as well as making it a stronger film.

I suppose I should also at least mention LaBeouf’s performance, which is purposefully showy, to the point that he put himself in the hospital while chewing the scenery. This is not the breakout performance that many may have claimed, and I don’t find his decision to play a character with a rat’s tale and numerous tattoos all that daring when surrounded by a bunch of non-professional actors who are clearly playing follow-the-leader with the only movie star on set. This film belongs much more to Lane (found on a beach during spring break), who plays into the contrived situations with as much conviction as can ever be expected from an amateur actor. If nothing else, Arnold has proved capable of telling female-centered coming-of-age tales, even if they are often too over-preoccupied with attempting to sensationalize the melodrama of each situation.

Despite the process being far more significant than the end result, there are surprisingly no making-of featurettes or behind-the-scenes footage of the filmmaking process. Perhaps they wanted to refrain from allowing audiences to see that there process mostly involved intoxication and improvisation, explaining the film’s lack of focus being sacrificed for raw and aimless energy. The only special feature included is interviews with Lane and Keough about the film.

***  The Blu-ray release comes with a Digital HD copy, though it is currently not available through Ultraviolet, as advertised. This problem may be resolved soon, but as of 12/27/16, this is what I know: The Blu-ray includes the usual code for adding to your digital library, but the code doesn’t work since they have yet to add the film into their system. I contacted Ultraviolet to let them know that this title was not available and the code entered brings up an error as a result. I didn’t let Ultraviolet know that I am a critic who has been sent the release by the studio itself for review purposes, because I wanted to see how they would treat the average consumer.

It turns out they treat them like common thieves. When I politely informed them of the missing films (several of the releases from the past few weeks are missing from their catelogue), they asked me to send them a receipt of purchase, proving I had actually bought the films. What’s even more frustrating than the implication of this request is the fact that it does nothing to address the real problem. Code or no code, receipt or no receipt, it does nothing to change the fact that the films are not even entered into the Ultraviolet system to begin with. I don’t know if the studios using this system are aware of the problems, but consumers should know what they are paying for, and as of 12/27/16 it is not a digital copy.