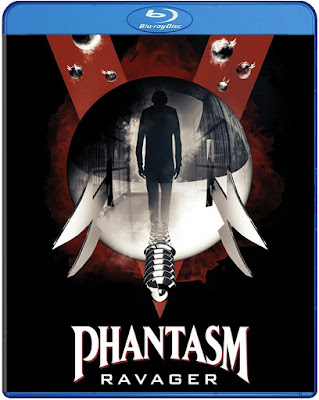 What began as an idea for a TV series, Ravager places a supporting character from the first film in the leading role, to be joined by nearly every living actor from the original in supporting roles. This often feels like the ultimate fan-service film, even if it is occasionally at the expense of good filmmaking. Reggie (Reggie Bannister) was an ice cream man and friend to the original protagonists, but we join him as he appears back in the desert after coming through a portal from another world. Reggie continues the mission of trying to take down The Tall Man (Angus Scrimm), giving us additional backstory into his existence along the way.

Reggie isn’t the only one battling The Tall Man, and along the way he crosses paths with a group of resistance fighters that include Mike (A. Michael Baldwin), the grown kid from the first film. Among the resistance fighters is also a woman named Jane (Dawn Cody), who shares a remarkable resemblance to a woman named Dawn that Reggie encounters along the desert road. This coincidence is as inexplicable as many elements in the film, which often take on a sort of dream logic. In fact, there are disorienting moments scattered throughout the entire film, where it is unclear if what we are witnessing is an illusion, a dream, or an alternate universe. More importantly, there is little effort to explain any of this to the audience.

This will have to be the final installment, at least in the original franchise (never doubt the possibility of remakes in today’s industry), as this was also the final film of Angus Scrimm, the iconic actor who is The Tall Man. This is the first of the five films not to be directed by Don Coscarelli, though he co-wrote the screenplay alongside director David Hartman. Hartman has most of his experience in animation, which may explain the distinct visual style of his film. Both Coscarelli and Hartman are included in the feature-film commentary track. Additional special features on the Blu-ray include a behind-the-scenes featurette clearly made for promotional purposes (and only five minutes in length), less than two minutes of deleted scenes, and over eight minutes of bloopers and outtakes. There is also a theatrical trailer.