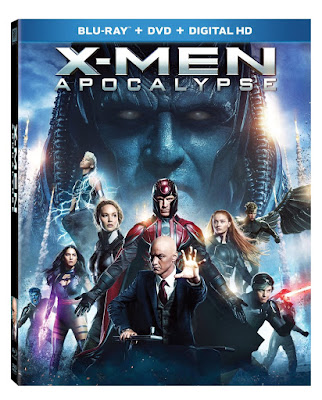 X-Men: Apocalypse has all of this, but somehow still feels dialed in. Everything from the story to Jennifer Lawrence’s lackluster costume seems half-ass in construction, as though half of the film’s job had been completed merely by getting the audience into the theater. The effort to get viewers to return for further films has greatly diminished, even if Apocalypse still has a few memorable sequences of distracting spectacle.

In what we are told is the final entry in the prequel storyline, our younger cast members return to play the iconic characters, including a few origin stories for familiar favorites along the way. More tragedy is thrown at Erik (Michael Fassbender), pushing him further into the villainous side of Magneto. Magneto uses his powers to start an apocalypse for a powerful mutant known as En Sabah Nur (Oscar Isaac). Charles Xavier (James McAvoy) also becomes a pawn in the world-destroying plan, forced to rely on his untrained students and a few veteran mutants to save him and the world.

One of the major characters to return is Mystique, though Jennifer Lawrence barely seems present in the role. Her performance is entirely dialed in, often feeling as if she may be too bored to finish her sentences. Worse yet is the lack of commitment to the technical work of the process, as Lawrence’s unwillingness to sit through the make-up process for Mystique resulted in a piss-poor body suit that looks like a bad Halloween costume rather than the effects of a massive Hollywood blockbuster. As the highest paid actress in the world, you would think Lawrence could be a bit more dedicated to the job countless others would be grateful for. If nothing else, I hope this is the last we see of this version of Mystique.

If Mystique disappoints because of Lawrence’s unwillingness to go through the effort to become the mutant, this is where the spectacle of the new mutants takes over. Having had the best sequence in the last film of the franchise, Evan Peters returns as Quicksilver in a much larger role. Once again, Quicksilver’s super-speed provides the film with its most entertaining spectacle-filled sequence. The film also gives Cyclops (Tye Sheridan) a proper origin story introduction to the world, and brings back Nightcrawler (Kodi Smit-McPhee) for the first time since the original trilogy, as well as setting up the direction for Storm (Alexandra Shipp) in the storylines that follow.

So much time is spent with a variety of mutants, each with unique abilities to showcase, it is easy not to notice the missing plot in X-Men: Apocalypse. There is a bad mutant that wants to destroy the world and good X-Men forced to save everyone with his destruction. It is as simple as that, which is narratively lackluster despite a good dose of symbolism and spectacle attempting to counterbalance the lack of plot. In other words, it is likely a good thing that this is the last of the X-Men prequel films, as it is beginning to feel like scrapings at the bottom of the barrel.

The Blu-ray release includes a DVD and a Digital HD copy. Some of the special features are doubled up on both of the discs, including a gag reel and an audio commentary with director Bryan Singer and screenwriter Simon Kinberg. There is also a photo gallery. Exclusive to the Blu-ray is a generic featurette, a video of the wrap party, and a series of deleted/extended scenes, which come with an optional introduction by Singer.