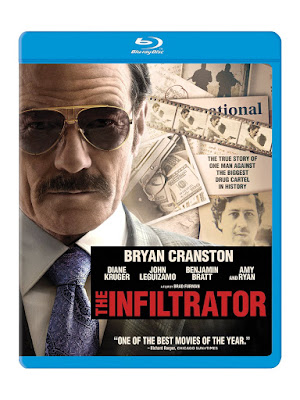 Based on the true story of federal agent Robert Mazur (Cranston) as he goes deep under cover to infiltrate Pablo Escobar’s drug trafficking business in 1986, The Infiltrator often feels like Netflix’s “Narcos,” without the larger contextualization or room for the narrative to breathe. Despite an exciting opening sequence of undercover police work involving dangerously lackluster technology, and a few seemingly random moments of violence throughout the film, this is much more of a movie about relationships. The true undercover work of The Infiltrator involves Mazur building friendships with the criminals rather than participating in the crime himself.
In order to accomplish this, Mazur must go undercover as money-laundering businessman Bob Musella, befriending Escobar’s top lieutenant, Roberto Alcaino (Benjamin Bratt). Mazur’s experience undercover involves the life of luxury that criminals live instead of the violence which affords it. As he attempts to take down the men at the top of the food chain, Mazur is more interested in the corrupt banks and dirty businessmen than he is the street level drug dealer or killer. This means that his undercover experience involves designer clothing and trips on private jets as opposed to the seedy lifestyle we are accustomed to seeing undercover cops embrace in film and TV.

Mazur’s removal from the violence also increases the significance of the relationship aspect of his undercover job. If they don’t trust him because he is committing crimes, they must trust him because they believe him to be a friend, and Mazur is able to achieve this with the inclusion of a fake wife. Although happily married with children, Mazur invents a fiancée as Musella as an excuse to avoid sleeping with a prostitute. While this originally poses a problem in the operation, it eventually allows him to establish a closer connection with Alcaino and his wife. Rookie agent Kathy Ertz (Diane Kruger) is brought on to play the role of his future wife, and their fabricated wedding serves as the perfect opportunity to collect all of the incriminated suspects in one place.

The adoption of a new fiancée, fake or otherwise, does not sit entirely well with Mazur’s real wife (Juliet Aubrey), showing the many ways that he is divided as a person during this operation. As he burrows further into Escobar’s criminal activities, Mazur must become closer to Alcaino, making this film about trust and betrayal. The layers of nuance in Cranston’s performance come from the sincerity he attaches to the adoption of Musella’s persona. At times it feels as though Mazur almost wishes he could remain Musella, adopting the friends and lifestyle he has been pretending were his own. This is far easier to understand with Kruger as the potential partner, and a life of luxury far removed from the violence it is created by, though it may leave some audience members disappointed by how much of The Infiltrator’s suspense is entirely internalized.

The Blu-ray release has no additional format viewing options, though it does have a couple of worthwhile extras. The highlight of the special features is a commentary track featuring Cranston and director Brad Furman. There are also a handful of deleted scenes and two featurettes. “The Three Bobs” discusses the different personas of Mazur, as played by Cranston and with commentary from the man the movie is based on. “How to Infiltrate” is a collection of three brief sections, examining more of the real-life aspects of these events.