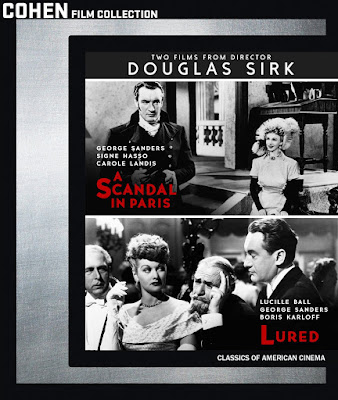 A Scandal in Paris is a delightfully wicked Napoleon-era costume film, a comedy with the type of dark edge expected from the dark comedies of Ealing Studios. The film is based on the memoirs of an elegant French thief named François Eugéne Vidocq (George Sanders). Despite dressing and behaving as an aristocrat, François was born in a prison and makes his living by stealing from those he fools with his polished demeanor. This skill of deception eventually lands him a job as the chief of police in Paris, where he makes plans to rob the city bank.

The only thing in the way of François’ plan is the granddaughter of the marquise, whose home he is a guest in. Loretta (Carole Landis) has fallen in love with the image of François long before meeting him, as he once posed as a saint in a painting that she admires. Her assumption is that he must be as honorable as the image he resembles, but soon discovers the secret behind his behavior. The only question remaining is whether her affections with be impacted by the truth of his nature.

Lured is the other film included in the Sirk set, and it is another unique spin on a familiar genre. Although the narrative is a typical detective whodunit, the approach is far more comedic than suspenseful. When a serial killer is targeting women in London through an advertisement in the personal columns, Scotland Yard enlists an American dance hall girl to go undercover to lure the killer into a trap. Starring Lucille Ball in the years before her success on “I Love Lucy,” nearly all of the typical gumshoe wisecracks are perfectly transferred to Ball’s comedic style in a gender-reversal for the murder mystery.

After a friend of hers goes missing, Sandra Carpenter (Ball) approaches the police for help, but instead gets a job offer. Inspector Harley Temple (Charles Coburn) realizes that the only way to catch the killer is by luring him, and capitalizes on Sandra’s resourceful nature. The plot is somewhat ludicrous, but this only enhances the comedic treatment of the material. And even with this humor, the mystery of the killer is no less intriguing, especially when Sandra becomes engaged to a man (George Sanders, once again) that she soon suspects to be the killer.

Each of these films has their own Blu-ray in this two disc set. They each also have a single special feature, which are surprisingly good for these lesser known Sirk classics. A Scandal in Paris comes with a commentary track featuring film critic Wade Major, while the commentary for Lured is provided by film historian Jeremy Arnold.