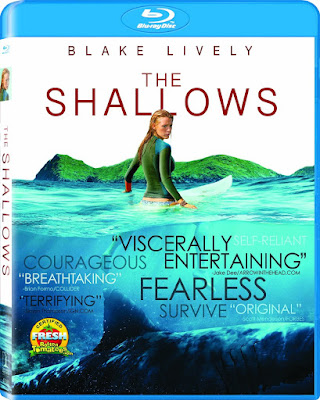 The Shallows is reminiscent of several similar films, but it borrows sparingly from these other narratives. Although a film featuring an aggressively attacking shark begs comparison to Jaws, it is really only the great white shark which is borrowed from Spielberg’s classic creature feature. The simplicity of the story structure in The Shallows is actually far more connected to survival narratives, most obviously including those that take place in the vastness of the ocean like Open Water and Life of Pi. But the best moments of The Shallows rely on the innovation needed for survival, as displayed in other survival film such as Buried and 127 Hours, though Jaume Collet-Serra’s film lacks the same emotional resonance and attachment to the protagonist.

Blake Lively stars as this film’s protagonist, Nancy, a med-school drop out in search of the same mysterious beach her mother surfed in her youth. Though this is the second leading role for Lively, unfortunately Nancy has less depth and development than most of the supporting roles played by the “Gossip Girl” star. That does not mean that Lively wasn’t the right choice for this role, because Nancy is a character with which looking good in a bikini is the most important attribute. The role needed more than just the glossy polish of Collet-Serra’s commercial filmmaking style, but the story longs for better written protagonist to engage the audience, even if that may have also demanded more than its star could provide.

Not only is Lively the star of The Shallows, she is one of the only characters in the entire narrative, not including the CGI shark terrorizing the beach. In an effort to make this more engaging, there are clearly efforts to add humanizing qualities to the creature beneath the sea, though footage of the computer generated character is wisely limited. Just as Spielberg realized decades ago, Collet-Serra understands that sometimes what we don’t see has the potential to be more frightening than that which is clearly visible.

The simplicity of the premise is a double-edged sword for film. Nancy wanders into a shark’s feeding ground while surfing and becomes entangled in a test of wills with the beast, stranded a mere 200 yards from the safety of shore. With no other ally than a wounded seagull, also doubling as Nancy’s only scene partner for much of the run-time, the movie instead relies on the innovative ways that she manages to survive. If only these were a bit cleverer, or had Nancy’s character been more interestingly developed, this may have been enough. As ashamed as I am to put it this way, The Shallows is very clearly in need of more depth.

The Blu-ray release comes with a digital HD copy of the film, as well as a handful of special features and a fancy lenticular cardboard slip cover. The extras include three deleted scenes and four featurettes. “Shooting in the Shallows” documents the difficulties shooting a film in water, whereas “Finding the Perfect Beach” chronicles the difficulty finding the perfect location for that narrative. “How to Build a Shark” looks at the effects used to create the film’s villain, and “When Sharks Attack” features the retelling of an actual shark attack from the survivor.