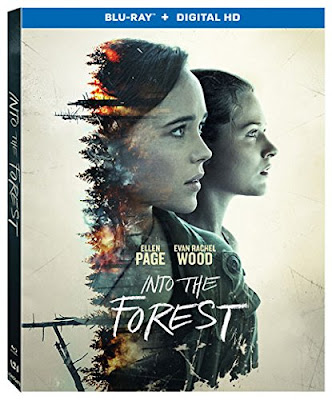 Regardless of budget and production values, Into the Forest has the kind of narrative intimacy expected of an independent film. Although it deals with an apocalyptic-size event in the United States the scope remains narrow. There are no massive explosions or special effects. For the most part, we don’t even see how the disaster affects the outside world, instead staying close to the two protagonists living in the isolation of the wilderness. This may make for a surprisingly subdued vision of the end of the world, but it also places that much more significance on the performances and their ability to convey the devastation. While the film drags the narrative utilizes some predictable and bleak narrative devices along the way, Into the Forest ultimately only holds up thanks to the performances by Evan Rachel Wood and Ellen Page.

Wood and Page may be fantastic in their roles, but that does not mean that the character that they play always are. Both actresses play roles much younger than their actual age, which isn’t a problem until the immaturity of their actions become harder to swallow in the bodies of grown adults. Younger actors may have made this behavior more understandable, and therefore less grating. Nell (Page) and Eva (Wood) are sisters living with their father (Callum Keith Rennie) in the woods when the entire country suddenly loses all power. All fuel and energy sources become a high demand item overnight and they are stranded in their isolated home with limited fuel for their generator. The fact that Eva constantly begs to use this life-saving fuel in order to play music so that she can dance is the kind of petty behavior that might have worked better with a younger actress.

In focusing on these two characters only, there are some narrative contrivances in order to move the plot along. While I appreciate the thematic significance and where it allowed the narrative to go, the way it uses a scene of sexual violence in order to move the plot along feels slightly exploitative and lazy. I don’t know if this comes from the source material itself (Into the Forest is based on the novel by Jean Hegland) or simply an inexact screenplay adaptation from filmmaker Patricia Rozema, but I often found myself caring about the character in spite of the screenplay rather than because of it. Once again, this is a testament to the performances at the center of the film. Even if it wasn’t perfect casting for these roles, Page and Wood have a chemistry together that simply works even when it is difficult to imagine that they are sisters.

The Blu-ray release includes a Digital HD copy of the film, and there are also two special features on the disc itself. There is a commentary track with writer/director Rozema, as well as a making-of featurette.