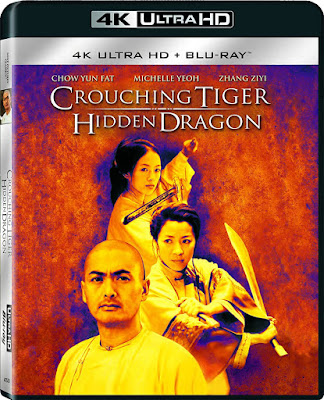 Set in 19th-century China, the film follows the theft of a sword called the Green Destiny and the efforts of two warriors to retrieve it. Li Mu Bai (Chow Yun Fat) gifts his beloved sword to a friend and fellow martial arts master, Yu Shu Lien (Michelle Yeoh), only to have it stolen by a mysterious masked thief in the night. These two warriors set out on a mission to retrieve the powerful sword, revealing the hidden skills of a young aristocrat named Jen Yu (Zhang Ziyi) who is preparing for an arranged marriage. As the details of her background are revealed, a love story and a revenge narrative emerge from the mystery behind the stolen sword.

Crouching Tiger, Hidden Dragon is the definitive art-house action film, filled with spectacle that is both awe-inspiring and visually poetic. While this film simply carried on the tradition of past Chinese martial arts films, it was a film that managed to catch the attention of U.S. audiences, reviving the genre and an entire market of films for a new generation. Now the 4K Ultra HD release provides the opportunity for a whole new generation to discover the film in remarkable clarity and detail.

There have been several Blu-ray releases of Crouching Tiger in the past, starting with a disc included in a set with two other modern martial arts movies. While each of these high definition releases were more than adequate in showing the spectacular photography amidst the ballet of kung-fu battles, the 4K brings added clarity to the aging film. Not only is there more detail, the colors also seem to leap off of the screen, and even the sound of the wind on the soundtrack creates an immersive experience with the right surround sound system. The 4K releases also comes with a Blu-ray disc and a Digital HD copy, along with all-new special features. There is an introduction by director Ang Lee that is only included on the 4K disc, as well as a new making-of featurette, a retrospective, and six never-before-seen deleted scenes. Also included are music videos and a theatrical trailer.