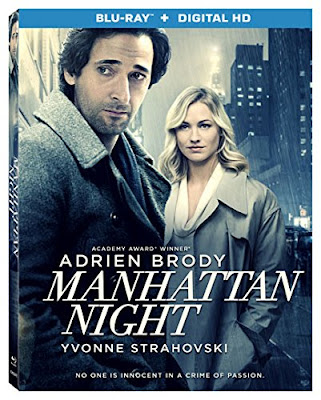 Adrien Brody stars as Porter Wren, the glum protagonist and gravel-voiced narrator of our seedy story. Wren is a cynical investigative reporter approached by gorgeous young widow Caroline (Yvonne Strahovski), as the film’s obvious femme fatale and scintillating screen siren. Despite being a (happily?) married man (with Jennifer Beals as his wife), Wren is easily talked into bed with Caroline shortly after agreeing to investigate the death of her husband, Simon Crowley (Campbell Scott).

As it turns out, Crowley was a filmmaker with dangerously powerful friends. No sooner than Wren begins to investigate his death, he finds himself approached and entangled in the secrets of these powerful men. They are worried about what Caroline may have discovered prior to Crowley’s death and insist that Wren help them in this investigation. As is often the case, there is a file of some sort that everyone is desperately trying to find while becoming paranoid that others already have it. Trapped in the middle of a dangerous game of secrets and blackmail, uncertain who is ultimately in control, Wren must find the truth before he becomes a pawn in someone’s larger game.

There are many darkly-lit night scenes with sorrowfully poetic dialogue between scenes of seduction, sex, and sporadic violence. All of the elements are there, and well done enough to make the viewing of Manhattan Night quite enjoyable as a glossy guilty pleasure. Brody keeps the slower scenes from dragging with a nuanced performance, and though Strahovski’s character is used more than utilized, she is utterly captivating as the subtle seductress. All of the elements come together quite nicely, however much this still feels like a minor effort.

The Blu-ray release of Manhattan Night includes a Digital HD copy of the film, along with surprisingly expansive special features included on the disc. The highlights of the extras are the commentary track and director’s notebook, both of which provide insight into the filmmaking process. The commentary track includes director/screenwriter/producer DeCubellis, joined by actor/producer Scott, and cinematographer David Tumblety. The director’s notebook comes with storyboards of the film’s more important sequences. Also included are some behind-the-scenes interviews with cast and crew, a brief featurette, and a collection of deleted/extended scenes adding over 17-minutes of footage to the story. There is also a theatrical trailer.