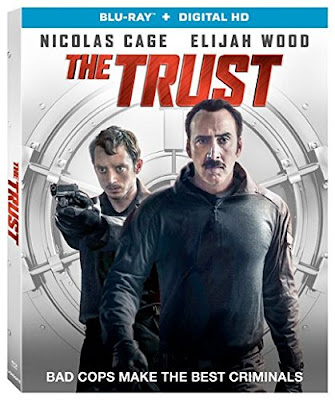 Cage and Wood play Stone and Waters, members of the Las Vegas Police Department with little in common. Stone (Cage) is a precise and detailed officer unable to advance in his career despite many efforts. Waters (Wood), on the other hand, has a deep disdain for his job and makes little effort to do it well. Stone is more interested in numbing himself with drugs and alcohol to get through his day at work, rather than finding ways to advance within it.  Though they seem to share little in common, both are dismissed as inconsequential officers and subsequently find that they have nothing to lose. The detail-oriented approach of Stone comes in handy when he believes that his personal investigating has uncovered a secret safe owned by the organized criminals of Las Vegas. The unlikely pair decides to team up in order to use this information for a secret heist.

There are countless heist films and just as many movies about crooked cops, but The Trust manages to stand out with an added element of dark comedy. Much of the humor comes from the mismatching of personality types, as is the case with many buddy cop film featuring protagonists on the right side of the law. Typically, these crooked cop narratives tend to be steeped in melodrama rather than humor, giving The Trust a unique tone despite many of its working parts often feeling vaguely familiar. With less engaging lead performances and an energetic pace to the narrative, The Trust very easily could have felt as uninspired as a majority of the movies Cage has recently been attached to. I don’t know if he simply cared enough to try harder this time around or if it was due to the dedication of directors Alex and Benjamin Brewer, but this is easily one of the better films Cage has made in years.

As completely watchable as the film may be, some of the character decisions in the final act of the film are more than a little frustrating. While it is apparent that they are necessary to move the story in the desired thematic direction, giving poignant double meaning to the film’s title, these poor character decisions may be enough to irritate some audience members. When you force your protagonists to do things out of character within the screenplay in order to get the story where you want it, audiences will push back against the fallacy of the situation. It is even more damaging when the characters themselves (as played by these enigmatic actors) are the most original aspect of the narrative, so that their sudden shift feels that much more contrived.
The Blu-ray release of The Trust comes with a Digital HD copy of the film, as well as a few extras. Predictably, one of the featurettes included covers the chemistry between the two leading actors, while the other is about the visuals of the Las Vegas setting. The final special feature is a commentary track with brother filmmaking team, Alex and Benjamin Brewer.