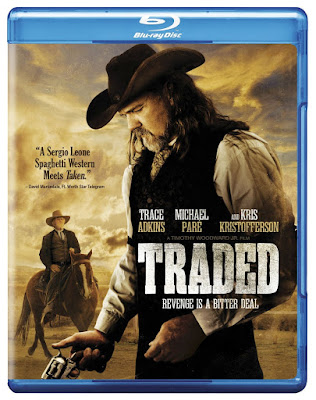 Michael Paré stars as Clay Travis, an 1880 Kansas rancher and family man faced with tragedy. After the accidental death of his son by snakebite, Clay and his wife (Constance Brenneman) mourn their loss. The audience celebrates the elimination of an awful performance from the child actor. This loss makes the disappearance of their eldest child even more devastating, giving Clay additional purpose to retrieve her unharmed. 17-year-old Lily Travis (Brittany Elizabeth Williams) initially runs away from home to work as a waitress of sorts in a nearby town, but quickly finds herself taken by a group of unsavory characters to be sold into prostitution.

Clay sets out to find his daughter and bring her home, and we quickly discover that he is much more than just a simple rancher. Lily is passed along from one place to another and Clay follows her trail, dispatching an assortment of villains along the way. Tom Sizemore is at ease playing a seedy saloon owner, musician Trace Adkins is a sharp-shooting brothel owner in Wichita, and Martin Kove is a somewhat unrelated abusive father that Clay seems to punish out of pure principal.

Clay also receives some help from decent people along the way, including the teenage girl being abused by the aforementioned father. Most recognizable, however, is Kris Kristofferson as a local bartender who offers a few inspirational speeches before joining Clay in the gunfight. It may be a small role, but Kristofferson’s presence is welcome, as he may be the only actor strong enough to survive the stodgy dialogue and amateur direction.

With a cast full of Kristoffersons, the screenplay by Mark Esslinger may have been easily dismissed between sequences of action, but the pacing of the film gives audiences little to focus on other than the stiff delivery of poorly written dialogue. The action is not exciting or prominent enough to distract from the film’s other shortcomings, like many other straight-to-video action films director Timothy Woodward Jr. has made in the past. At least those atrocities were not period films, but Traded has a strange digital look that contradicts the period feel it is meant to evoke. Continuity is also a consistent problem for Woodward, though this also may have been less noticeable had the pace of the film been less sluggish.

The Blu-ray release offers no help in hiding the film’s flaws, especially the technical ones on full display in high definition. Special features include a making of featurette and two deleted scenes, each with an optional filmmaker commentary track.