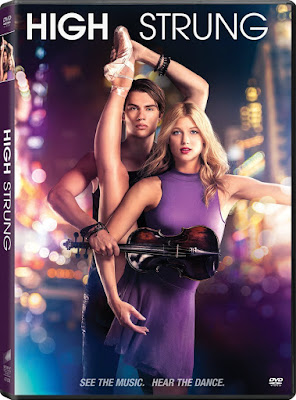 In describing the plot of High Strung, a movie about an innocent young blond teen dancer who moves to the big city and learns how to integrate a hip-hop style with her abilities in classical dance, I could easily be talking about any number of dance films, from Save the Last Dance to several entries in the Step Up franchise. Literally nothing about this film feels original or fresh, but that might not matter to the younger audience members it seems directed at, many of which may be unfamiliar with how much of the movie is a retread. Even the flaws remain the same, casting actors for their abilities during the musical numbers rather than for convincing acting. Awkward dialogue and predictable plot points give way to some well executed dance choreography and a bit of creative musical composition. If only this were a music video, there would plenty positive to say.

Professional dancer Keenan Kampa gives acting a try as Ruby, the aforementioned blonde protagonist, and actually ends up coming off far better than some of the cast members with actual acting experience. Ruby is a Midwest dancer whose scholarship at the Manhattan Conservatory of the Arts and a chance encounter with a brooding British street violinist and his hip-hop dancing friends changes the trajectory of her education. Johnnie (Nicholas Galitzine) has a huge chip on his shoulder, but Ruby is inexplicably attracted to him anyway. Their romance is about as believable as the depiction of lower income housing in Manhattan (the film was primarily shot in Romania), making this a movie well suited for those who have never been in love or lived in New York City.

Ruby is great at the discipline needed for classical dance, but she struggles to let go enough to excel in her hip-hop dancing class led by a tyrannical teacher (played by Jane Seymour). Somehow Johnnie is the one to teach her this, even though he has no dancing experience and spends much of the film acting as though there is a violin bow stuck up his ass. Their star-crossed-lovers romance is as predictable as it gets, which might have been more endurable had there been any believable chemistry between the pair. Again, I found myself surprised to see Kampa putting forth the most effort, while Galitzine seems to think that his pretty-boy looks and moody demeanor is all that acting requires.

Galitzine is not the only attractive face in the cast to have a hard time with the clunky dialogue written by director Michael Damian (best known as a daytime soap opera actor) and his wife. Possibly the only bigger mistake than the casting of Galitzine is the actor playing his competition, both musically and romantically. The role of Kyle, a spoiled rotten violinist attending MCA and pursuing Ruby for the first quarter of the film, is played by Richard Southgate. Although the British actor gives his best efforts at an American accent, he is often still indistinguishable to Johnnie due to their similar features and nearly the exact same haircut. Fans of Ex Machina may also recognize Sonoya Mizuno, who plays Ruby’s fun-loving roommate. She may have been convincing as Oscar Isaac’s emotionless nude dancing robot, but her handle on dialogue and human emotion is not nearly as believable. Although I’m sure Mizuno’s casting had something to do with her dance abilities, there is not nearly enough of this on display to make up for her shortcomings as an actor.

Even though it may seem somewhat inconsequential to the film itself, I also must mention the marketing for High Strung, particularly the poster/cover art. Not only does the heavily airbrushed image make the lead actors appear plastic, but there is also something oddly erotic about the image for a PG-rated film. While I understand that the ability to raise your leg above your head is a desirable skill in dance (and one that Kampa displays as often as possible, in her dance career and in this film), the inclusion of her co-star’s limbs and the positioning of her hand makes the image look uncomfortably masturbatory. This film is in the strange middle ground where it wants to be hip enough to hint at sex while remaining innocent enough in the content shown to receive a PG rating.