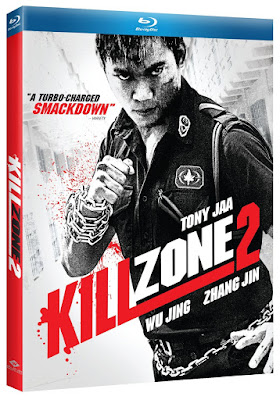 While the plot is heavily reliant on moments of coincidence and melodrama which demand more suspension of disbelief than the physical feats created with wire-work, Kill Zone 2 provides a showcase for the most thrilling martial arts and impressive camera choreography an action film has seen since The Raid 2. Even with the loss of the two biggest names from the original 2005 film, this loose sequel stands on its own merits and provides Tony Jaa with his best cinematic opportunity in years as their replacement. Moments of the story’s drama and some convoluted non-linear editing in the first act are far from perfect, but all is forgiven whenever any of the film’s major action sequences begin.

Aside from a few brief bouts, Kill Zone 2 takes its time getting to the action, making audiences earn it by sitting through a confusing opening act which jumps back and forth in time while introducing the characters. Several actors from the first film return, but they seem to be playing different characters. In any case, the story is new, involving an organ trafficking business being run out of a prison in Thailand. When undercover police officer Kit (Wu Jing) is discovered while working to expose the drug trade run by Chinese crime lord Mun-Gong Hung (Louis Koo), he is sent to this prison along with Hung’s own brother. The criminal mastermind is plagued with a heart condition that is killing him, leaving only his sibling’s unwilling organ donation as his chance for survival.

Kit’s disappearance leads his uncle and colleague (Simon Yam) to defy orders and track him to Thailand, uncovering the conspiracy along the way. But these two need help in order to survive, which is where the compassion of a prison guard named Chai (Jaa) becomes their greatest asset. Rather coincidentally, Chai’s daughter is dying from cancer and is desperately in need of a bone marrow transplant that the corrupt prison warden (Zhang Jin) is able to provide. Even more coincidentally, Kit is also a match for the marrow transplant, leading to some of the film’s stranger sequences.

The moral dilemma that Chai faces between morality and the safety of his daughter leads down a predictable path, and eventually this pair teams up to take down all of the bad guys. The elaborate set-up takes some work to get through, but it leads to the typical physical resolution we watch these martial arts action films for. While the film offers some variety in action, including a large scale shootout in an airport terminal, it is the hand-to-hand combat which elevates Kill Zone 2. This includes the usual final showdown in which the heroes are outnumbered and/or outmatched, but one of the film’s most impressive sequences is a large scale prison riot that is just as much about the choreography of the camera as it is the stunts completed by the skilled performers.

Regardless of how elaborate the set-up for Kill Zone 2 may be, it is a straightforward action film at its core. The film itself is far from perfect. With a run-time of just over two-hours, the scales lean a bit heavier on the side of melodrama rather than action, and some of these sequences drive the story into silly territory. The final resolution also relies on a strangely unnecessary scene involving a CGI wolf and out-of-place voiceover from Chai’s daughter, but these are hardly enough to outweigh the successful elements of the movie. Imperfect as it may be, Kill Zone 2 is a must-see for any dedicated action fans.

The Blu-ray release provides an even more comprehensive way to experience the film for those unable to witness the spectacle on a big screen. While the high definition certainly helps enhance the slow motion sequences and subtle special effects, it always amazes me how much the 5.1 HD surround sound increases the impact of each punch thrown. Sound effects for martial arts movies have improved greatly over the decades, and the impact of this work increases the suspense in each sequence. The disc’s special features include a making-of featurette for those who like to see how the stunts were accomplished. Unfortunately there are only three segments of this featurette, each under three-minutes long, but the deleted scenes include over seventeen-minutes of additional footage. The film’s trailer is also included.