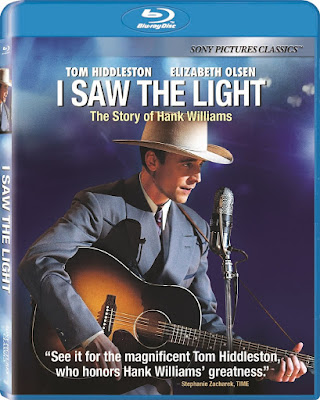 In the age of the internet, criticism of films begins long before the first screening has taken place. It often begins with casting decisions (or sooner, as the announcement of a female Ghostbusters proved), which is why Nina was dead in the water once it was announced that Zoe Saldana would play the legendary singer. There was a similar controversy over the casting of British actor Tom Hiddleston for the role of country-western icon Hank Williams, but his performance ended being one of the only things to work in I Saw the Light. They could have just as easily cast an American actor, but it would have done nothing to improve the problems with the film.

Although I Saw the Light skips over the early years of Williams’ life and focuses on the brief period of his successful musical career, it still manages to drag more than countless other musical biopics that cover far greater periods of time. And despite taking place over a briefer amount of time, a majority of the movie focuses on elements of the country singer’s personal life rather than his musical career. To make a bad situation worse, these elements also happen to be the most over-used and derivative plot devices of the subgenre, including substance abuse and flagrant womanizing. We’ve seen this before, and far better nearly every other time.

The film begins with Williams already at a moderate level of success as an early morning radio personality, and with his marriage to Audrey (Elizabeth Olsen). While Olsen’s performance outshines Hiddleston in nearly every scene, Audrey is portrayed as so selfishly interested in the advancement of her own music career that it becomes difficult to empathize with her, despite the constant philandering that Williams does during their marriage. She still comes off far better than his last wife, Billie Jean Jones, a blandly written role played by Maddie Hasson. Williams is similarly unsympathetic, showing more of his drunken behavior than the musical talent that made him an icon. Even when there are scenes of him performing, they feel like interludes between the episodes marital melodrama and substance abuse. The screenplay with three writers and at least two major rewrites doesn’t even show us the advancement of his career, instead just jumping ahead to the moments he was suddenly more popular.

Even though it doesn’t take place over a long period of time, this film dragged at two hours. Skipping over anything remotely interesting, I Saw the Light hits the same notes repeatedly. No matter how good Hiddleston was able to imitate the twang and swagger of Williams (and as far as I can tell, he did a decent job), there is nothing remotely enjoyable about this film. The music ends up feeling somewhat lifeless as directed by Marc Abraham, who has yet to prove himself as a filmmaker. Despite countless producing credits, this is only his sophomore film as a director and the first feature-film writing credit. Writing two TV episode scripts in the 1980s was hardly experience enough to handle this material.

Clearly attempting to make up for the lackluster theatrical release, the Blu-ray offers some exclusive special features in hopes of enticing fans to pay for the upgrade. There are a handful of deleted scenes and footage of the premiere in Nashville, complete with a musical performance from Hiddleston. Additional extras include a featurette discussing the musical icon, a making-of featurette, and a commentary track with Abraham. The Blu-ray release also comes with a digital copy of the film.