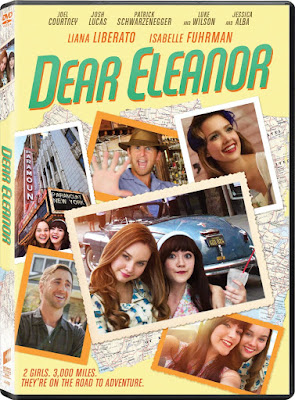 Dear Eleanor may be tame by PG-13 standards, with only a few select swear words in the screenplay, but it is enough to place this film in limbo between ratings and audiences. Adults will likely find the protagonists and the illogical story too much too endure for too little adult payoff, but few parents will want their children exposed to the glamorization of smoking and stripping. The result is a film for nobody, even if there are elements beyond the screenplay competent enough to hint at a better film with a clearer vision and several rewrites.

Set during 1962 with several key events as the backdrop for teenage melodrama, two best friends decide to take a cross-country road trip as way of grieving a recent loss. Left to take care of her many siblings after the sudden death of her mother, Ellie (Liana Liberato) has lost the ability to behave like a child. Her best friend Max (Isabelle Fuhrman) has found no reason to act like an adult, which is clear by a misguided performance from the star. For some reason Fuhrman is under the impression that 15-year-old girls in the ‘60s had the maturity level of someone several years younger. This pair decides to travel to New York to visit former First Lady after receiving a fake letter from her, meeting with an assortment of unlikely characters along the way.

The first addition to their road trip is an escaped criminal (Josh Lucas) from Alcatraz prison, who joins them on their journey as they travel back to Las Vegas to pick up Max’s performing aunt, Daisy (Alba). Daisy is a professional Broadway dancer whose failure led her to burlesque dancing in Sin City, but the film idealistically has her succeeding at an audition in New York before the final resolution. We are meant to ignore the fact that these two irresponsible adults are basically helping the two runaways escape Ellie’s concerned father (Luke Wilson), who is following them cross-country. Max’s parents apparently don’t care, as they never appear in the narrative despite her being a year younger than Ellie.

The absurdity of the lengthy road trip lacks common sense knowledge of geography and speed limits of cars/highways in the 1960s, or at the very least an inability to adequately depict the passage of time. The solution to this problem often involves shoehorning actual events taking place during October and November of 1962 into the storyline. Brief footage of the Cuban Missile Crisis on passing televisions lets us know when events are taking place, but this still doesn’t explain how they find an escaped prisoner from the coast of California hiding out near a remote farm in Colorado. Even with real events and places used in the film, this movie has less logic than a fantasy film.

The DVD includes two commentary tracks, one with the director and the second for the writing team behind this oddly unclassifiable film. Neither are warranted nor are they necessary, like the film itself, and I can’t imagine who they are intended for.

I have to agree with this assessment. The writing in Dear Eleanor was lacking in any originality, edge or compelling narrative. For a cross country trip, the scenery looks exactly the same (the same areas of Boulder County, I live there) Jessica Alba is underused and the film suffers because of that. I still think Connelly has some potential as a director, he should have raised his eyebrow at this script. Sometimes one good writer is a better idea than two mediocre ones.