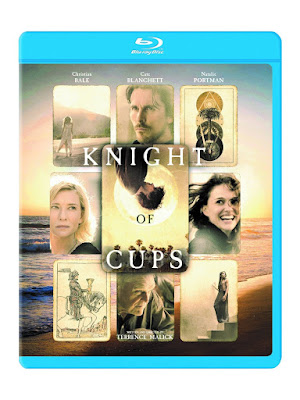 Knight of Cup offers little in terms of story and less for character development as we witness the vapid lifestyle of Hollywood screenwriter Rick (Christian Bale), along with some derivative familial melodrama for good measure. It is unclear if Rick is a womanizer or the narrative merely takes place over an extended period, as there is no reference to make the timeline clear. This does not help us to understand our protagonist’s motivations, and is among many efforts within the film to keep Rick at a distance. Little of the dialogue belongs to him, and this is within a film that is primarily told through the signature breathy voiceover Malick uses in excess. When characters do happen to speak within the scene itself, very little is consequential to understanding the story being told.

As Rick makes various amorous connections throughout the superficially beautiful landscapes of Los Angeles and Las Vegas, providing brief acting exercise opportunities for a handful of actresses, some of the individual scenarios take specific form. Cate Blanchett appears as an ex-wife musing over the failures of their marriage, Natalie Portman is a married woman who engages in an affair with Rick, and Teresa Palmer is a stripper met on a trip to Sin City. Even as these individual situations can be vaguely relatable, they tell us little about the characters. Perhaps the hope was that in leaving much ambiguous within the narrative, the film’s end result would be even more broadly relatable, but this also means that the success of Knight of Cups is dependant upon how much each audience member is willing to bring to the experience. As an art piece, this has the potential to work, but it is an utter failure as a piece of entertainment.

The dangers of working without a clear and concise screenplay are prevalently on display in Knight of Cups, but so are the benefits. Every so often is a moment of cinematic brilliance within the film, though they are often surrounded by convoluted scenes of aimlessness. There are only so many sequences that can be watched of a moody and silent Bale wandering around with perplexed expression or attractive actresses putting on a forced act of spontaneity. At a certain point it just becomes tiresome, just like the transparently familiar father issues that Malick has carried over from Tree of Life. Once again, Rick is more observer than participant as his brother (Wes Bentley) has volatile interactions with their father (Brian Dennehy) for unknown reasons. The message that many men have father issues may be clear, but some actual scripted detail would have been necessary for this to actually resonate rather than coming off as another cinematic platitude.

The Blu-ray release does give audiences the opportunity to see Emmanuel Lubezki’s showy cinematography in high definition, though it offers few other advantages. The solitary extra is a featurette with many of the cast members praising Malick’s style of filmmaking, even though a majority of the actors are glorified extras hired to play contrived and superficial versions of themselves during many of the soulless sequences of Hollywood exorbitance. Blink and you will miss many of these appearances, though they will tell you in the featurette that the experience was among their favorite in filmmaking. This is yet another indication that the process of making Knight of Cups was far more enjoyable than viewing it.