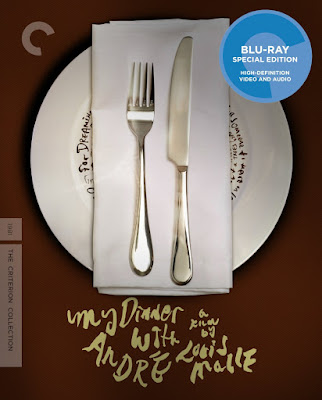 
Winterbottom is hardly the first to have attempted an imitation or homage to the style of Louis Malle’s famed film. One can easily imagine this being a great influence on Steven Soderbergh in the creation of his debut feature, Sex, Lies, and Videotape (1989) as well. But what is it about this film which inspires such praise and admiration, especially considering it is simply two men debating the ideology of their craft over a meal in a stuffy French restaurant? This is the type of film that is either praised or dismissed entirely, and I can’t say that I would find fault in either reaction. It is hardly an accessible piece of entertainment, but that seems to be the point.

Though they have stated that the roles they are playing were merely characters that retain their names, the idea for My Dinner with Andre was born out of real conversations between longtime friends and theatrical collaborators Wallace Shawn and André Gregory. These conversations were developed into a screenplay that provided French filmmaker Louis Malle the perfect English-language film to fit his desire to experiment with new ideas in each project. The challenge of making a film that is made up of a single conversation must have greatly appealed to Malle, enough for him to collaborate with Shawn and Gregory again with his final film, Vanya on 42nd Street (1994).

Although Shawn had already established himself as a popular character actor by the time of the film’s release (primarily for his supporting role in Woody Allen’s [1979]), this was theater director Gregory’s first foray into feature-film acting. Because of this, Shawn is the more relatable and accessible of the two personalities, and we spend much of the film’s running time trying to understand Gregory’s thought process, along with his longtime friend who is primarily eating and listening for the first half of the nearly two-hour running-time. Gregory doesn’t seem to eat much, but instead spouts endless ideas and theories. At certain points it seems as if Shawn’s presence is almost inconsequential beyond giving Gregory an audience, and we get the impression he would share his philosophy with anyone brave enough to endure a meal with him.

Gregory discusses his many travels and adventures after having abandoned the theater in search of life’s true answers. He describes a series of self-involved artistic experimentations in his travels with pure narcissism that simultaneously feels slightly judgmental of his far more grounded friend. It isn’t until the second half of the meal/film that Shawn puts down his fork and begins to fight back with his own philosophy, though we get the impression that some of his argument is made out of defensiveness. While Gregory has thrown all caution to the wind in favor of personal enlightenment (even selfishly abandoning his family for long periods during his travels), Shawn has taken a more pragmatic approach to his career as an artist. When his career as a playwright is failing to pay the bills, Shawn turns to acting as a way to make money, describing this as though he had shamefully sold out despite having little more financial success in this endeavor. In the opening voice-over, Shawn admits to thinking more about money with his artistic projects as he grows older, though he argues in defense of this mentality while in conversation to Gregory. In the end, both must admit that they each have doubts about their paths, and each find truths in the polarized opinion of their meal companion.

Arriving on Blu-ray for the first time, My Dinner with Andre is presented with a 2K digitally restored print, along with an uncompressed monaural soundtrack. There are no new special features, though a 2009 interview with Gregory and Shawn conducted by Noah Baumbach is included, along with a 1982 episode of the BBC program, “Arena,” which has Shawn interviewing Malle. Also included in the package is a booklet insert featuring an essay from critic Amy Taubin and a short preface by Gregory and Shawn from a publication of the film’s screenplay.