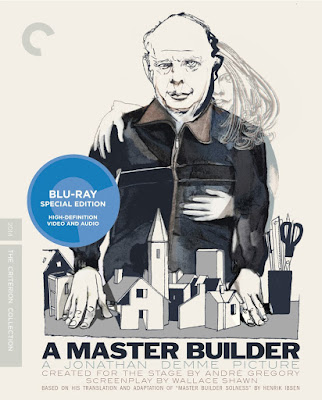 A Master Builder has similar aspirations, with Shawn adapting Henrik Ibsen to the cinematic world. It didn’t begin as a film project, however, and Shawn spent fifteen years rehearsing the adaptation with Gregory at the helm as director. Aligning perfectly with the “character” version of himself in My Dinner with Andre, Gregory led the theatrical production of their Ibsen adaptation through 15 years of rehearsals and workshops, never actually producing a performance for the public. It wasn’t until Jonathan Demme expressed an interest in adapting the incomplete theatrical experiment into a film that these ideas came into full fruition with A Master Builder.

Though there are clear parallels to the previous theatrical works done by Shawn and Gregory, much of the film’s delivery and stylistic choices also align with Demme’s last cinematic endeavor, Rachel Getting Married (2008). Unfortunately, I found this film to be laborious and stylistically unattractive, which would be my same criticism of A Master Builder. Not since Michael Mann has a filmmaker so quickly abandoned the polished look of the blockbuster in favor of a more experimental style, and as I watched Demme’s film of the Ibsen adaptation, I couldn’t help but feel it would have made a better play than a film.

The alterations Shawn and Gregory have made to the theater piece are intriguing, beginning with an opening deathbed sequence that suggests much of the film is merely a dream-like fantasy occurring in the mind of our title character, Halvard Solness (Shawn). Though he is nearing his demise in this opening scene, soon after that the respected architect/contractor is bustling around his home as though nothing were wrong, with only the sound of a beeping EKG over the soundtrack hinting at the fallacy of these sequences. Filled with the type of philosophical discussion that padded the entire running-time of My Dinner with Andre, Solness discusses his life and work with a mysterious young woman named Hilde (Lisa Joyce) who suddenly appears to visit him.

There are additional storylines, such as the resentment from Solness’ wife (Julie Hagerty) upon the arrival of this visitor as well as other questionable relationships the architect has with surrounding young women in his employ or pleas from a friend (Gregory) to endorse the work of his son (Jeff Biehl) before his own demise, but each of these narratives take place in the dream-like walls of the hospital-like home. Focus remains on conversation rather than action, which is why the material feels appropriate for the stage. It is more than just the heavy dialogue and fantasy elements, however. The performances themselves have a theatrical quality to them, which can be jarring to watch in close-up.

Critics seem to be at odds about the performance from theater actor Joyce, whose energy takes over control of the narrative and is even permitted and inexplicable scene that does not involve Solness at all. Joyce is energetic and expressive, no doubt a joy to watch in the distancing medium of theater, but onscreen her performance feels like a routine. Even when the dialogue is drearily weighed down by philosophy, Joyce forces reactions to everything as though it were her responsibility to breathe life into the words. This often comes out in the form of forced laughter, which ends up becoming a verbal tic punctuating every line of dialogue. There is even a sequence with Hagerty where this compulsion is almost mocked, with both women one-upping each other with increasingly unbelievable expulsions of cackling. Though I can understand the praise of Joyce’s performance when viewing the movie as a filmed piece of theater, I found her exaggerated mannerisms to be distractingly (and often irritatingly) artificial. Perhaps this is the point of Demme’s film, but in that case, I did not much enjoy the experience.

This director-approved Blu-ray release contains a high-definition digital master, supervised by director of photography Declan Quinn (Rachel Getting Married), along with a 5.1 surround DTS-HD Master Audio soundtrack. There are three all-new special features included in the extras; an interview with Demme, Gregory and Shawn conducted by critic David Edelstein, a conversation between Hagerty and Joyce, and a program which features a conversation between Gregory, Shawn and author Fran Lebowitz. How fitting that the extras for a film filled with dialogue would be a series of additional conversations. Also included are the film’s trailer and a foldout insert containing an essay from film critic Michael Sragow.