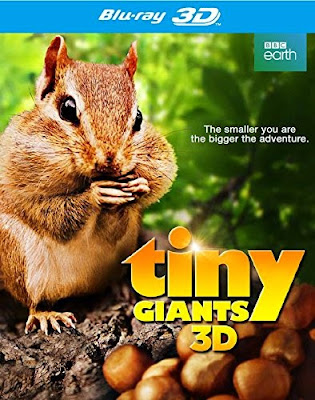 
The popularity of the nature program skyrocketed with the success of “Planet Earth” and there have been many visually stunning imitators since its release. Advances in film technology has only made programs like this more predominant, so it should come as no surprise that BBC has begun to dip into the world of 3D visuals. Unfortunately, the release of the 44-minute short documentary film, Tiny Giants, also marks another trend: the repurposing of previously used material. Although the 3D disc is a new addition to the footage, there is no new content within the film. Just as Disneynature re-cut the footage of “Planet Earth” to make their family-friendly theatrical release, Earth, Tiny Giants is made up of footage from the three-hour BBC miniseries from 2014, “Hidden Kingdoms.” Also being released is Wings, a re-release of the Best Buy exclusive film, Winged Planet 3D.

With as much respect and accuracy as possible, movie-magic was utilized to stage some of the shots in order to capture the essence of what it feels like to be a creature as small as those contained in “Hidden Kingdoms.” This may be somewhat controversial in the world of nature photography, but it provides particular viewing spectacle for the 3D formatting. I can only imagine what this film would look like on an Imax screen, truly giving the audience an idea of what it must feel like to be small as a mouse. There are other benefits to the truncated version of the magnificent BBC series, many of which were exposed by Disneynature’s practices.

The most obvious benefit is that Tiny Giants plays out like a best-of film, focusing only on two of the most engaging creatures from the series. These include the grasshopper mouse from the first episode and the chipmunks from episode two. None of the city-dwelling creatures from the third episode are included, nor are the supporting stories from the first two. These are compelling enough to leave you wanting more, but the running-time also ensures younger audiences will be more likely to retain interest to the very end.

Even though there has been some editing to the material, thankfully some of the elements have been left untouched. The score from composer Ben Foster (The Theory of Everything) remains, as does the narration from Stephen Fry. This ensures that despite being edited down for length, the film has not been dumbed down for audiences. With that being said, even the original “” series knew how to blend spectacle and entertainment with educational and scientific material. Not much needed to be toned down for children, and Fry’s light narration helps the short film move even faster. Though hardcore viewers of nature programming may find the content simplistic, I also can’t imagine that they would seek out 3D as a necessary asset to the educational process. You could call it nature programming for dummies, but it just as easily could be described as educational entertainment.

The 3D is not perfect, especially depending on the quality and size of your home theater set-up, but the strong visual style of the show lends itself to the format. The colors are bright and crisp, with plenty of camera tricks to highlight the movement in a way that’s effective. There were sets built to force perspective, small lenses utilized, and even the use of green screen in order to show the massive size of the larger creatures nearby. Some of the use of green screen reads as false, and the illusions never manage to match the impressiveness of a simple slow-motion shot, but the good far outweighs the negative in this inventive take on the nature program. I would still recommend the “HiddenKingdoms” Blu-ray over this in 3D, but children are more likely to find this truncated version more engaging.

The single disc release includes a 3D Blu-ray disc, which is also capable of playing in 2D if the proper equipment is missing. The special features also include a 9-minute making-of featurette, which is also an edited down version of a feature included for each of the episodes of “.”

I worked on both the Hidden Kingdoms and Tiny giants 3D and actually you're incorrect on several assumptions. I'm glad you enjoyed the series, and to an extent the 3d tiny giants, but I think it's harsh to brush this off as just a rehash like you have pointed out.

With Tiny Giants 3d Almost everything(90%) was shot natively in 3D @ 4k(2 red epic cameras in a mirror rig+ a special rig for super macro work) Everything else was impossible to do natively so we converted to 3d. From the outset this was also aimed for the IMAX giant screen format and is currently showing in USA and Australia!

Because of these constraints, it was actually was the Hidden Kingdoms series that benefited from the some of the 3d content, but of course in 2d.

Tiny Giants 3D also had totally separate post production and editing process because of the Native 3d content. Although granted there are some cross pollination of shots and storylines are similar, the sequences were edited differently as 3D needs a slower editing pace and the Imax requires different composition that TV.
With Tiny Giants it took a lot of hard work in the 2 year production and post to pull off, something I don't think anyone outside of film making will see, but I thought you may find interesting.

Thanks for that additional information. I do find it interesting and appreciate being given inside information, even if it proves me wrong! To be honest, there was a lengthy period of time in-between my viewing of the film and the TV show, and I was also limited in the information I was able to find while researching.

Then there is also the unfortunate but constant cycle of deadlines which make truly in-depth analysis difficult. I would spend far more time on each release, if I could, having some degree of personal experience to know what amount of effort goes into each production, as I'm sure you can also relate to.

Feel free to continue analyzing my work with the same critical mindset that I use to review movies, especially when your personal experience supersedes my humble opinion.