This past Wednesday evening I was invited to attend the premiere of Wrong Cops at The Vista Theater in , a perfect off-Hollywood site for the opening of a film teetering on the outskirts of mainstream cinema. I’m not sure if there is a name for this new sub-genre of extreme comedic irreverence in independent films, but writer/director Quentin Dupieux is a pioneer of the movement. These films feel like a marriage between David Lynch and Jared Hess, what might happen if the random carnage and dreamlike narrative were to take place in a world of awkward character actors. He got up in front of the audience to introduce the film, apologizing for the scenes being out of focus, humorously explaining that it was “almost on purpose.”

Wrong Cops is the latest feature from Dupieux, following his cult hit Rubber in 2010, and the similarly titled Wrong from 2012. Despite the similarities in titles, Wrong Cops is not a sequel to Wrong, despite a brief cameo from Dolph Springer (Jack Plotnick) and his dog. Plotnick is only one of many surprises in the ensemble casting of Wrong Cops, many of which were able to make it out for the celebration on Wednesday evening. 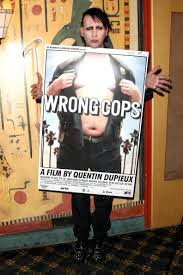 Although Dupieux may be at the forefront of this bizarre world of irreverent comedic violence, he is not the only one making this type of entertainment. Eric Wareheim and Tim Heidecker have been making ‘Tim and Eric’ productions in this vein for years, in any number of formats, and 2012 they released Tim and Eric’s Billion Dollar Movie. Eric Wareheim joins the cast of Wrong Cops as an officer with a disturbing way of using his power, not to mention eating a sandwich. Wareheim was out for the premiere, standing a good foot taller than anyone else in the room, with the possible exception of Marilyn Manson.

Manson is one of the most bizarre casting choices in the film, and also the most inspired. He plays a reclusive teenager with a little bit of an attitude and braces on his upper teeth, and it is a breakout performance making this film. He was also in rare form on Wednesday, joking with friends and cast members. Also in attendance was Steve Little, best known for his role on HBO’s “Eastbound and Down,” but also the star of The Catechism Cataclysm, a comedy/horror film by Todd Rohal with the same sensibility of a Tim and Eric or Dupieux production. Also attending from the cast was Mark Brunham, Vanessa Sapien,  Grace Zabriskie, Arden Myrin, Isabella Palmieri, Daniel Quinn, Jennifer Blanc, Ray Wise.