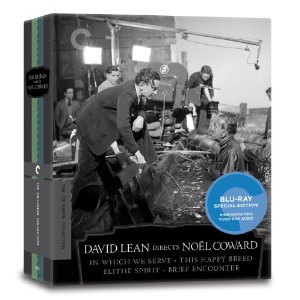 The title of this quartet of films is perhaps no more fitting than it is for In Which We Serve, in which famous playwright Noël Coward was both star and co-director. He was also the screenwriter, of course. At the time, David Lean was known as one of the best editors in , having cut together the Powell and Pressburger propaganda film, The 49th Parallel. Though he was paired up with the actor/writer Coward, most credit would not go to Lean for this first effort. His initial job was only to direct Coward, while the actor/screenwriter would direct the remainder of the cast, though it quickly became clear that Lean was capable on his own.
By the time they rejoined for a second pairing, Lean was established as the director with Coward as the writer. With a history in theater, Coward was able to bring the strong influence of language to Lean’s cinematic experience. Together they would make four films, from 1942 to 1945. What began as a propaganda endeavor during World War II became a profitable partnership which helped to launch each into new career endeavors. All four films have been included in this spectacular Blu-ray collection, each with new high-definition digital transfers of the BFI National Archive’s 2008 restorations. In Which We Serve comes with a new interview by Coward scholar, Barry Day, as well as a short documentary about the making of the film which was created in 2000. The last feature is an audio recording from 1969 between Coward and supporting actor Richard Attenborough.
After the gloriously sentimental propaganda film, Lean would have his first solo directorial credits in This Happy Breed (1944), Coward’s chronicle of a working class family living in a suburb from the end of World War I to the start of World War II. The British domestic drama features Lean/Coward regular, Celia Johnson, who appears in all but one of the four films. Her debut was successfully delightful in In Which We Serve, playing opposite the screenwriter himself, and she is even more fitting for This Happy Breed. Robert Newton plays opposite as husband Frank Gibbons, and together the pair have three extremely different children who are blessed with joy and tragedy throughout the two decades of the film’s storyline. The disc’s special features include new interviews with Barry Day and cinematographer/screenwriter/producer Ronald Neame from 2010.
The third film in the set is a supernatural comedy based on the record-breaking stage play by Coward. It stars Rex Harrison as a novelist who accidentally brings back the ghost of his dead first wife (Kay Hammond), much to the chagrin of his current wife (Constance Cummings). With Oscar-winning special effects, this supernatural comedy is filled with delightful banter and fun visuals. It also has a spectacular supporting performance from the amateur medium played by Margaret Rutherford. The disc’s special features include a new interview with Barry Day along with an episode of the British television series, “The Southbank Show” from 1992, which is about the career of Coward.
The last in the collection is perhaps the most recognizable as well. Brief Encounters (1945) stars Celia Johnson as a married woman who happens to meet a married doctor (Trevor Howard) on a train platform one afternoon. They have a passionate flirtation with the possibility of an affair, though it inevitably ends with a whimper rather than a bang. Though tempted enough to meet each other on the train platform, neither are the type of person to have an affair. The interactions are simple and romantic without ever reaching a place of infidelity, making this a bittersweet love story about making the hard choices because they are the right ones. The disc’s special features include an audio commentary with film historian Bruce Eder, another new interview with Day and two short documentaries. One is on the making of the film while the other is a television documentary about Lean’s career.