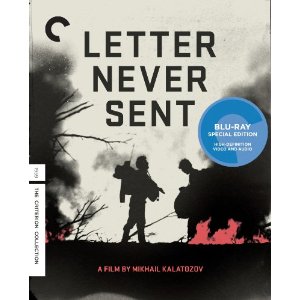 
Letter Never Sent was directed by Mikhail Kalatozov, with the distinct style of cinematographer Sergei Urusevsky. Their previous collaboration in 1957, The Cranes Are Flying, and a future one in 1964’s I Am Cuba are better known, but in between them was Letter Never Sent. In 1959 this pair made a tale of human perseverance though extreme difficulty, most unpredictably brought on by the elements of nature. Visually daring in the manner that the film was shot, Letter Never Sent may not be Kalatozov’s most memorable film, but it is one which cannot be dismissed its seat of significance in the history of filmmaking.
Based on a story by Valeri Osipov and co-scripted by The Cranes Are Flying screenwriter Victor Rozov, Letter Never Sent is a tale of human expedition which turns into a story about survival in the wild. At the beginning of the tale, four geologists start their expedition in search of diamond beds in the wilderness of the Central Siberian Plateau. The group’s leader is Sabinin (Innokenti Smoktunovsky), whose title letter written homes to his wife is the film’s narration through voiceover for the first portion of the film. The expedition is also paired with a love triangle between the other three geologists on the expedition, which has a second unsent letter. Tanya (Tatyana Samoilova from The Cranes Are Flying) is in a relationship with the passive and peaceful Andrei (Vasili Livanov), while the brutish Sergei (Yevgeny Urbansky) is forced to write out his feelings in a letter which is never meant to be read.
This sub-plot becomes somewhat irrelevant when the foursome is in a desperate struggle for their lives. Just as they are able to accomplish their goal and celebrate, their path for escaping the wilderness is threatened by a forest fire. The remainder of the film is a harrowing escape through the perils of the fire and into the equally deadly cold of the Siberian winter. After losing contact with their base camp, their only hope is to keep moving and hope for rescue. As their numbers dwindle down, the film becomes one about sacrifice for the greater good of society. They are each willing to lay down their lives to provide the world with their discovery.
The Blu-ray release includes a new high definition digital restoration, with an uncompressed monaural soundtrack and new English subtitle translations. The package also comes with a booklet insert that has production still photos and an essay by film scholar Dina Iordanova.