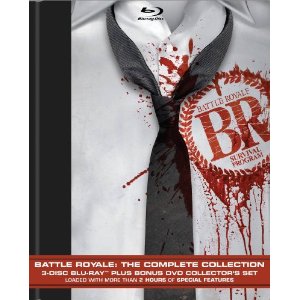 
I grew tired of the hype behind The Hunger Games film about five minutes after it began. Popular fiction like The Hunger Games and the Twilight series may come with a built in audience of teenage girls, but the preferences of teen girls has never been an assurance of quality. Maybe these books really do have a compelling story which will come across well onscreen and make lots of money. The last thing that this film is, however, is original. The Hunger Games is simply a watered down rip-off of Japanese filmmaker Kinji Fukasaku’s 2000 film, Battle Royale, and its subsequent sequel. Though it was nominated for 10 Japanese Academy Awards and was critically praised as being poetically violent, only with the release of Hunger Games is this film series being released officially for the first time in . Bootlegs and imports are no longer necessary; now these modern foreign classics can be experienced on high definition Blu-ray.
The films take place in the near future, where youth has lost all respect for adults. The attendance numbers in schools are down, which causes the government to implement a new law that allows punishment of a randomly selected school. This is the main plot point which makes little sense to me. If they are intending to punish children for not attending school, wouldn’t it be wiser to hunt down those not attending rather than those who still do? It seems that if there is a chance that a school trip will get you killed, it would be a deterrent from school. We join one Jr. High class as they are tricked into a game of Battle Royale, which is led by their former teacher (Takeshi “Beat” Kitano). Each of the students is equipped with an explosive collar, which will detonate if they try to leave the island or if more than one student is remaining at the end of the game. The point of the game is to kill everyone else, pitting an entire class of Jr. High kids against each other. Every student is given a back-pack with food, water and a variety of weapons, ranging from deadly to useless.
In an interview with Hunger Games director Gary Ross moaned and complained that there was no relevance between comparing his film with Battle Royale. Though he admits to never having read the books by Koushun Takami or the films which followed, Ross was quoted as saying “I promise you, the main character in Battle Royale didn’t end up in a revolution and become a Joan of Arc leading an uprising.” The thing is, the survivors from Battle Royale return in the sequel to lead an uprising and revolution against the games and adults who started it. Ross is not only wrong, but he promises dissimilarities when he also admits not to have read or seen any material from Battle Royale to know anyway. During the production of Battle Royale II in 2003, director Kinjo Fukasaku passed away, leaving his son Kenta to finish the job as director. The sequel has new rules for the fighting 9th graders, who are now sent in to fight against the leaders of the revolution, instead of against each other. If they can’t kill the revolutionaries, they will die themselves.
The four-disc collection includes both the theatrical and the extended director’s cut of Battle Royale, each on their own disc. The third disc contains the sequel, with a fourth bonus DVD for over two hours of special features. There are so many special features that it is difficult to know where to begin. It seems easier to list what is missing. There are a number of documentaries which cover the making of the films, as well as a trailer gallery. There is also footage from the press for the film, including festival interviews. More behind-the-scenes footage can be found in the rehearsal footage as well as special effects comparisons. With over two hours of extras to peruse, we have gone from having no Battle Royale to an excess.