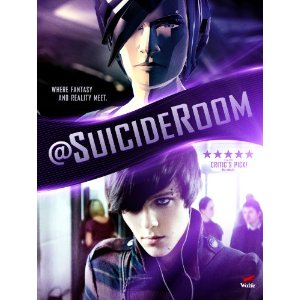 @Suicide Room teeters on the edge of many stylistic genre films before plummeting into semi-traditional drama and melodrama, no less effective in execution. An official selection at the 2011 Berlin International Film Festival and box-office hit in , @Suicide Room is the latest from critically acclaimed writer/director Jan Komasa. It is a cautionary tale about school bullying and the ostracizing of homosexual teens, within the cybernetic world teens now socially live.
Over-privileged teen Dominik (Jakub Gierszal) has plenty of friends until his sexuality becomes school gossip. At first a dare kiss turned into an online video is more flattering socially, but when an interaction with a friend turns into online bullying, Dominik escapes into solitude. Refusing to leave his room, Dominik instead spends all of his time in a virtual online world called the “Suicide Room.” Although he is near graduation, Dominik refuses to return to the ridicule of school.
The sequences in which Dominik is lost online are shown through animation, bringing the audience into the virtual world. This world allows for the fantasy of release from the torments of real life, and Dominik is able to meet a follow tortured soul in this world. The saddest part of the film is the damaging ways in which the solitude inevitably takes over Dominik and pushes him over the edge rather than helping him to recover. The DVD includes a trailer.