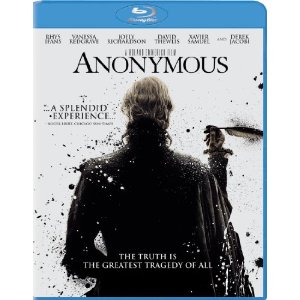 
I was hesitant when first discovering Anonymous, the Roland Emmerich film about a hidden truth about the works by William Shakespeare. I feared another Romeo & Juliet sub-plot, another gaudy imitation of Shakespeare in Love. The fact that Anonymous is directed by Roland Emmerich did little to put my mind at ease, as his past few films have left a great deal to be desired in my estimation. Though I feel it could have been cut down to a slightly shorter length, Anonymous is a solid piece of entertainment; one which relies on wit and clever connections to famed works, rather than relying heavily on the undressing and idolizing of Gwyneth Paltrow.
The storyline is somewhat difficult to grasp in the beginning, both because of the disorienting jumps back and forth in time and the fact that William Shakespeare is not even present for the beginning of the story. This is because the true author of the plays must only release them under the name of Anonymous. During the political world of Elizabethan England, image is everything. It was well and fine for a commoner to be writing poetry and plays, but royalty was held with much greater expectations. When Earl De Vere, Earl of Oxford (Rhys Ifans) continues writing in secret, it threatens to destroy his chances for political advancements which are expected of him. This all takes place during the rule of Elizabeth I (Vanessa Redgrave), and the Essex Rebellion against her.
In order to see his material played before an audience, the Earl enlists a local author to pose as the writer of his plays. Instead of stepping into the role himself, the author passes the duty along to actor Will Shakespeare (Rafe Spall), an obnoxious drunken oaf. Though there is little reason to believe that this theory is actually true, Anonymous makes for great entertainment. The dialogue by John Orloff is rich and well deserving of a film about the greatest playwright to ever put ink to paper, and Anonymous is a film adorned with costumes and period pieces that look spectacular in high definition.
Exclusive to the Blu-ray are a group of extended and alternate scenes, as well as a featurette on the film’s speech and one for the special effects. Special features also include a commentary track with Emmerich and Orloff, additional deleted scenes and a featurette about the theories behind the true author of Shakespeare’s works.

I will now see this film...because of your honest review...