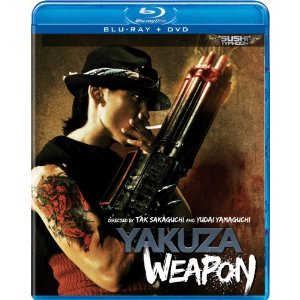 Japanese cinema of digital excesses throws all subtlety aside in this teenage boy’s wet dream comic book adaptation.
For all of those critics of cinema with accusations of offensive and ultra violent material, I would suggest you never delve into the world of Japanese cinema. Boundaries which have never even been approached in American cinema have long since been crossed in the violent Japanese gangster and actions films. Yakuza Weapon is vulgar, offensive to women, and over-the-top in the amount of violence and bloodshed fit into 90 minutes. Credit must be given to co-filmmakers Yudai Yamaguchi and Tak Sakaguchi simply for the limits which they exceed in their cinema of excess. And in this case the excess comes in the form of cybernetic penis implants and rockets which shoot from female the orifices of a nude female robot.
Shozo Iwaki (co-director Sakaguchi) is an ex-yakuza member who only returns when he hears that his father has been brutally murdered by a traitorous subordinate named Kurawaki. The overthrowing ruler is also wanted by the Law Enforcement Agencies, to the point where they are willing to implement new technology in order to catch him. After Shozo has two limbs blown off in a vengeful attack, he awakes to find that his arm has been replaced with an M61 Vulcan cannon and his new leg doubles as a rocket launcher.
The remainder of the film is a bloody battle in which a weaponized man does battle against a slew of opponents, leading up to a battle against several villains with their own cybernetic improvements. Aside from a strong sexual undertone to much of the violence, the concept of Yakuza Weapon is solid if not a bit unoriginal. The strongest portion of the film, however, are the ones with less reliance on the special effects and carnage and more on old fashioned fight choreography.
The special features on the Blu-ray include a behind-the-scenes featurette, deleted scenes and a spin-off short film. There is also a trailer gallery, though the real benefit of the Blu-ray disc is the high definition presentation of this highly visceral film.