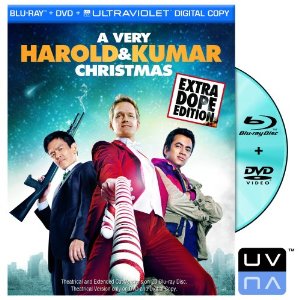 The first Harold and Kumar was a revelation, a return to the smartly written weed comedy duo days which had been gone since the parting of Cheech and Chong. It was a road trip comedy in structure and a slapstick drug trip in content. The lackluster sequel brought a few laughs and a vaguely similar scenario. With a “bottomless” party and a look-alike actor playing our infamous former president, the Harold and Kumar sequel also had an abundance of Bush jokes.
The latest film brings a little bit of holiday cheer in the form of an assaulting 3-D movie. Cocaine rains across the screen and everything from feces to eggs are thrown into view for these effects. But beneath that is a continuation of a series about the friendship of two very different minority pot smokers. There are many more drugs than marijuana in this second sequel, A Very Harold & Kumar 3-D Christmas, even inspiring a claymation sequence when an unknown substance in ingested in eggnog.
When we join our best friends, they are not at all close any longer. While Kumar has merely spiraled even further into his drug addled routine with the loss of both Harold and his girlfriend. When she returns momentarily to announce her pregnancy, Kumar is too stoned to even pay attention. Harold, on the other hand, is obsessively responsible. He has quit smoking marijuana and although he is a successful man with a beautiful wife, the holidays mean a house full of his angry and racist in-laws. When Kumar stops by momentarily to give Harold a gift delivered to their former shared apartment, it causes an accident which forces the pair to spend the rest of the evening trying to repair. And no Harold & Kumar film is quite complete without a visit from Neil Patrick Harris as himself, this time even showing off some of his Broadway talent with a song and dance.
There are many hilarious riotous moments within the storyline, however sweet the sub-line of the film may be. One of these running gags involves a baby. Imagine that the baby in The Hangover had been treated the way the monkey was treated in The Hangover Part 2. Now double that and you will have an idea of what the baby in A Very Harold & Kumar Christmas withstands.  Even the claymation sequence, which has forever been synonymous with Christmas specials, is wrought with violence and bloody mayhem. Throw in a few car crashes, a violent Russian mob boss and you have one extreme Christmas film.
The Blu-ray includes both an extended cut of the film, which is about six minutes longer, and the theatrical. The DVD is also included on the flipside of the double-sided disc. The special features include a few deleted scenes, along with two featurettes. The better of the two is about the making of the claymation sequence. The high definition doesn’t help improve the fact that this film was meant to be seen in 3-D. This doesn’t mean that the jokes aren’t still funny, but the special effects are not quite as forgiving in 2-D. The Blu-ray combo pack also includes an Ultraviolet digital copy.