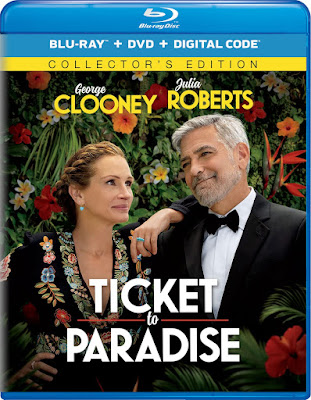 If only because of how rare it is to see a theatrically released romantic comedy these days, not to mention one directed at an older demographic, Ticket to Paradise is a small victory. The reason why the film works is because of stars George Clooney and rom-com legend Julia Roberts. This is apparent in the fact that the gag reel at the end of the movie is entirely made up of them, despite an ensemble cast of supporting actors. The film would not work without these two, and it is only because of their charming movie star performances that all of the film’s flaws are forgivable. And as charming as they are, there are plenty of flaws.

Ticket to Paradise works not only as a romantic comedy, but also as a screwball comedy, a genre also commonly referred to as a “comedy of remarriage.” Clooney and Roberts star as David and Georgia Cotton, a formerly married couple who can’t stand to be around each other despite the necessity when supporting their daughter Lily (Kaitlyn Dever) in her major life moments. After Lily meets a local seaweed farmer named Gede (Maxime Bouttier) while on vacation in Bali, she makes the decision to marry him and cancel her plans to become a lawyer. David and Georgia are forced to be near each other while traveling to the wedding in provincial islands of Indonesia.

Despite their inability to get along, David and Georgia join forces to try and stop Lily from getting married. In the process, they inevitably rekindle their relationship in predictable but enjoyable formula nature. This is what makes Ticket to Paradise work, though there are many elements of the film also getting in the way. As enjoyable as the chemistry between Clooney and Roberts is, the rest of the cast is either painfully bland or obnoxiously one-dimensional. Although the premise of the film involves the romance between Lily and Gede, their relationship is both boring and unconvincing. This is still more enjoyable than the pointless addition of Billie Lourd as Lily’s crass best friend. She is more caricature than character and played by an actress who has long leaned on a career built from nepotism. Ticket to Paradise would be a much better film with the removal of this character alone.

If you are willing to accept the annoying and bad along with the sweet and charming bits, Ticket to Paradise is an enjoyable film. It doesn’t break any new ground and has a lot of cheesy moments, though it will make for a good date night where the film is secondary to the company watching it with you. In other words, this isn’t a bad film so long as you aren’t paying attention to closely.

The Collector’s Edition Blu-ray release of Ticket to Paradise also comes with a DVD copy and a digital code. The special features on the disc itself includes four featurettes with behind-the-scenes footage and interviews. “Return of the Dynamic Duo” is completely about the reunion of Clooney and Roberts, who previously worked together in the Ocean’s Eleven franchise. Another featurette traces elements of the production, including the tropical location used in the film. There are also several rather pointless featurettes, including one with details about the wedding in the movie and another with footage of Dever and Lourd on set.