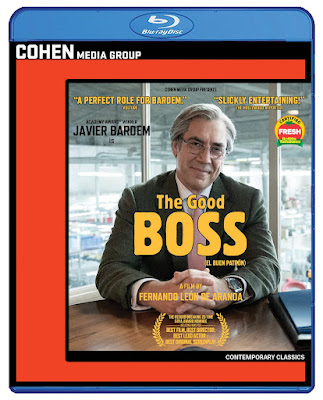 My expectations were quite high when I heard that The Good Boss earned a record-breaking 20 nominations at the 36th Goya Awards, winning six of them including Best Picture, Best Director, Best Actor, and Best Original Screenplay. While the filmmaking is undeniably solid, I was somewhat disappointed by the overly familiar path the narrative took in satirizing big business and the upper class. It is well done, but also contained little that hasn’t already been covered in many films before this one. If you don’t mind narrative tropes being recycled, however, The Good Boss has a lot to offer audiences onboard with a comedic take on bad behavior, both personal and in business.

The corporate satire follows Julio Blanco (Javier Bardem), the owner of a family-run factory of industrial scales in a Spanish provincial town. Although Blanco likes to give speeches claiming his employees are like family, he selfishly manipulates them for his own gain, and firing the ones that get in the way of his goals. Given the way he also treats his own family, including disloyalty to his wife Adela (Sonia Almarcha), these claims may actually be relevant. With a potential award on the line, Blanco does his best to juggle all of the issues occurring in his factory.

At the top of the list of problems is a recently fired employee who decides to camp outside of the factory and protest his unjust treatment, which goes directly against the image Blanco wants to present. The smoothness of the factory’s operations are also thrown into disarray when Blanco’s top employee Miralles (Manolo Solo) begins to have marital problems after his wife begins sleeping with a coworker following his own affair with a secretary. Blanco has his own marital indiscretion when an attractive new intern named Liliana (Almudena Amor) begins working for him.

The relationship subplots can actually detract from the satirical aspects of the storyline, only truly held together by an impressive lead performance from Bardem as the self-serving boss. Although there are humorous elements to the film, some may find the ways Blanco gets away with his deviant behavior anything but funny. While a wealthy character able to escape taking responsibility for his actions may be realistic, it isn’t exactly fun to watch. With that being said, The Good Boss does manage to land the ending with a memorable final shot that is entirely dependent on Bardem’s performance.

The Blu-ray release for The Good Boss may not be as impressive as it could be for a film as highly praised as this, although there are two features with interviews by Bardem and writer/director Fernando León de Aranoa.