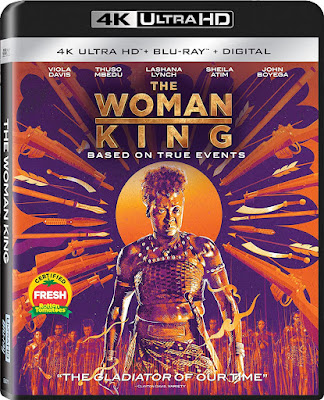 For those who want more realism in their action than the CGI-filled silliness of Marvel films, The Woman King is a good option. At the same time, for a film about female warriors, the action is surprisingly sparse. Instead, the film veers into melodrama territory, complete with a severed mother/daughter relationship. There is also a tragic romance in the film. Even with some solid action choreography and an impressive performance by Viola Davis, it is a little disappointing that a female-led action movie spends so little time with the action and instead chooses romance and tear-jerker subplots to fill much of the run-time.

Despite Davis being top-billed and at the head of the marketing campaign, she isn’t actually the main character of The Woman King. The film instead follows Nawi (Thuso Mbedu), a new recruit in the Agojie, an all-female group of warriors in the 19th century West African kingdom of Dahomey. General Nanisca (Davis) takes these warriors in missions to liberate Dahomean women who were abducted by slavers from the Oyo Empire, under the leadership of King Ghezo (John Boyega). Nawi’s training takes up a large portion of the film, especially when something in her personality causes Nanisca to challenge her more than the other new recruits.

I have always been a fan of director Gina Prince-Bythewood, though I’m not entirely convinced she was the right choice for The Woman King. Although the drama is successful, this often means the action elements are pushed to the background. And when there are action scenes, great efforts are put into making sure it is never graphic enough to achieve anything above a PG-13 rating, even at the expense of the spectacle and the realism of the violence.

The PG-13 rating was achieved partially by over-editing the action scenes, cutting away from blows before any blood is seen. These blood-less scenes of action not only detract from the realism, but the quick editing also makes it near impossible to see what is happening in many of the battle scenes. If the drama was half as good as the action, The Woman King could have been a great film. As an R-rated movie it would have been spectacular, but as a PG-13 it is just okay. There is also so much preoccupation with the coincidences and contrivances of relationships, the focus is mostly left off of the battlefield. In reality, there are only two or three scenes of actual action, with the rest just dedicated to training and the relationships between the soldiers.

Although the lack of realistic action is somewhat disappointing, The Woman King is well shot and features and convincingly tough supporting performance by Davis. The cinematography looks especially good on the HDR of the 4K release. The color of fire is especially vibrant, and the nighttime battle scenes contrast the daytime training sequences with vivid colors. Even though the screenplay and editing of the film left me underwhelmed, the good aspects of the filmmaking are highlighted and improved with the high definition presentation.

The 4K release also comes with a Blu-ray copy of the movie and a digital copy. There are also plenty of extras, including three featurettes (“Representation Matters,” Woman/Warrior,” and “Storytellers”), behind-the-scenes footage from the set with Viola Davis, and audition footage for Thuso Mbedu. The best of the extras is a commentary track with Prince-Bythewood, who provides insight into many elements of the story, including a defense of some of the choices I did not care for.