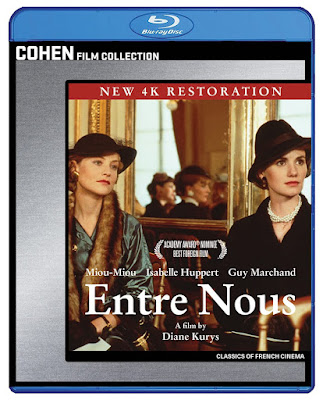 Entre Nous is a biographical film from director Diane Kurys (Peppermint Soda) based on her parents’ relationship and the woman that came between them during her childhood. The dedication to events sometimes hinders the film, jumping forward in time periods quickly and without developing major events, starting with World War II. This abbreviated recounting of events is also primarily focused on a potential lesbian romance which never develops, which may have seemed groundbreaking when Entre Nous was released in 1983 despite feeling underdeveloped nearly forty years later.

In order to avoid being deported to Nazi Germany after being interned by the Vichy government in 1942, a young Jewish woman named Léna (Isabelle Huppert) agrees to marry Michel Korski (Guy Marchand), a guard at the camp. Although Michel opens a successful garage and Léna has two children with him, she appears unsatisfied with her life of wealth and looks elsewhere for satisfaction. Finding little purpose in her children, she develops a friendship with Madeleine Segara née Vernier (Miou-Miou), another married woman who doesn’t seem to care for her husband (Jacques Alric) or child.

These two women seem to have a flirtation with each other, though they also both cheat on their husbands with other men, which confuses the narrative some and makes them highly unsympathetic. It is also hard to feel sympathy for Léna because she is so self-centered in the way she treats her children, on top of stealing and lying to her husband. While the representation of a possible lesbian relationship has been praised, it would be much easier to enjoy with more likable characters. Léna and Madeleine become obsessed with opening a dress shop together, and she uses her husband’s wealth in the same way she used his status to escape the Vichy government.

The Blu-ray release of Entre Nous presents a new 4K restoration in high definition, which means the film looks great even when the story is somewhat underwhelming. The special features also include an interview with director Diane Kurys, who discusses the significance of the film has to her along with details about the production. The detailed interview is nearly 40-minutes long. The only other extras are trailers.