The Ballad of the Sad Café Blu-ray Review 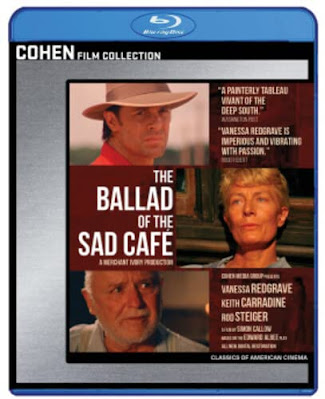 Not every story works in all formats. While I am certain there is something about Carson McCullers novella that worked, possibly even adapted well to the stage play written by Edward Albee, I found it difficult to ever get on board with the film adaptation, The Ballad of the Sad Café. While the novella must have had the benefit of the author’s narration and the play must have had dialogue to tell the story, the film directed by Simon Callow relies almost entirely upon imagery, but this often leaves the audience with little insight into the internal world of the characters.

There essentially only three characters that matter in The Ballad of the Sad Café, beginning with Miss Amelia (Vanessa Redgrave), the proprietor of a small town’s café, where she sells her own moonshine to locals with little else to do with their evenings. Despite being essential to the community, Amelia is antisocial and unfriendly, until the sudden arrival of a man named Lymon (Cork Hubbert) claiming to be her distant cousin. Even though she has never met Lymon before, Amelia quickly warms to him, and their friendship also impacts the way she treats the locals. Suddenly, her café becomes a lively and warm place full of hospitality.

This dynamic is changed suddenly again when another stranger arrives in town. Marvin Macy (Keith Carradine) was once married to Amelia, shown in a confused timeline within the film, though it ended suddenly when he was sent to prison. After returning and claiming to be a different man, Marvin disrupts the dynamic between Lymon and Amelia and throws the community into chaos. In a strange turn of events, Amelia challenges Marvin to a boxing match in her café.

There are some solid performances in The Ballad of the Sad Café, as well as poetically constructed imagery. Unfortunately, all of these impressive elements don’t entirely add up to an enjoyable film experience. It feels like there is a piece missing from the puzzle. Perhaps this is a film best appreciated by those already familiar with the original text, or even just the stage play. Without that context, the human behavior in the narrative comes off as bizarre and gives the audience little to connect to. There is a quirky tale in here, but it feels incomplete at best, and incoherent at worst.

The Blu-ray release has a new restoration of the 1991 Southern Gothic dark comedy, which looks good even if that is the most it has to offer. The bonus features also include a new commentary track with film critic and author Peter Tonguette, who may offer enough context and analysis to the view to change some opinions about the point of the movie. That doesn’t necessarily mean it will make the movie any more enjoyable.