A Fish in the Bathtub Blu-ray Review 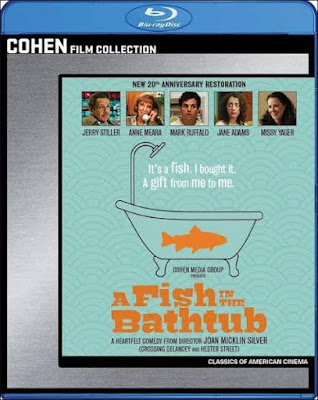 Along with belonging in a group of 1990s independent comedies that feel like mild imitations of Woody Allen, often set in New York and involving partner-swapping without veering into melodrama, A Fish in the Bathtub also has the feeling of a sitcom. This is not just because the cast is made up of several actors who have played parents in memorable half-hour comedies, but also because the narrative is highly episodic and has a resolution which restores everything back to the way it began, much like the formula of nearly every sitcom. It can make A Fish in the Bathtub feel slight and irreverent, but that may be the point of enjoyment for some.

Although A Fish in the Bathtub has an ensemble cast of characters, they are all centered around a disturbance in the marriage of Sam (Jerry Stiller) and Molly (Anne Meara). After forty years together, Sam and Molly are adept at getting on each other’s nerves, but it reaches new heights with the unexpected purchase of a large carp. When Sam goes out to pick up some things from the store for Molly, he comes home with the large fish and proceeds to keep it as a pet in the bathtub of their spare bathroom. Deciding this is the breaking point, Molly moves out for an extended stay with their son Joel (Mark Ruffalo) and his wife (Missy Yager). Molly begins to date an old friend while Sam stubbornly refuses to admit fault, though it is always predictable what the resolution will be.

At the same time that Sam and Molly’s marriage is in turmoil, Joel flirts with the possibility of cheating on his own wife with a client he has sold a house to. This storyline holds about the same weight as the parents’ marital problems, making the entire film feel surprisingly light for the material. While it is enjoyable to watch real-life married couple Stiller and Meara banter with each other, I couldn’t help but feel it would have been better as a sitcom. I already felt their relationship was never in danger because of the tone director Joan Micklin Silver implements, but the laughs were also too few and far between. It danced somewhere between two genres, never committing enough to either for a memorable experience.

The Blu-ray release of A Fish in the Bathtub has the look of a 1990s independent film, regardless of the high definition presentation. The special features on the disc include a Q&A with Silver and the multiple screenwriters from a public screening, along with two trailers for the movie. It isn’t much, but also more than I expected from such a slight and forgettable film.