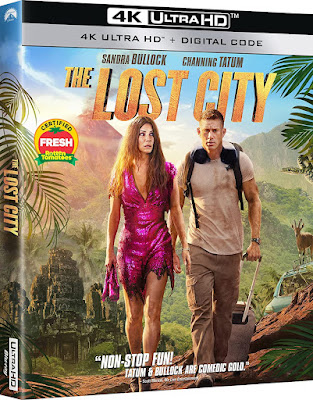 There is something refreshing about seeing a blockbuster can still exist without being a part of a larger franchise or cinematic universe. For that reason, I was fully in support of The Lost City, even if the final product felt somewhat lazily constructed. Even with some fun adventure, The Lost City mostly feels formulaically reliant on the worst the romantic comedy has to offer. Star power is what moves the narrative forward, and audience enjoyment mostly depends on how much the audience likes the cast members. Unfortunately, even liking Sandra Bullock and Channing Tatum as individuals did little to convince me of their chemistry together. And the film needed much more from Brad Pitt’s character, who has always been underutilized as a comedic actor.

I was slightly put off by the age difference between Bullock and Ryan Reynolds in The Proposal, and it is even worse in The Lost City, which feels like a combination of that plot with a number of Indiana Jones rip-offs from the 1980s and ‘90s. In the film Bullock plays romance novel author Dr. Loretta Sage, whose lives a reclusive life since the death of her husband and instead lives vicariously through a book series centered on Dr. Angela Lovemore, and her romantic interest, Dash McMahon. While promoting her latest book, The Lost City of D, Loretta is forced to go on a publicity tour with Alan Caprison (Tatum), the dim-witted model used for the cover of her book series. Alan tries hard to impress Loretta, though she resents the fact that he is inexplicably more popular than she is with her own fans.

Because Loretta has utilized historical research for her latest novel, a criminal billionaire named Abigail Fairfax (Daniel Radcliffe) becomes convinced she will be able to help find an ancient city containing a lost treasure. Despite Loretta insisting the opposite, Fairfax kidnaps Loretta, which is witnessed by Alan. Since the hero he models as is nothing more than an image established for publicity, Alan hires a tracker named Jack Trainer (Pitt), and sets out on a mission to rescue the romance novelist.

The plot of The Lost City is silly, as are most of the characters. Bullock leans into the serious and professional-minded persona she has often played, but the film’s screenplay relies a little too heavily upon the charm of the cast members. While The Lost City is an easy view and decent date night movie, it is also highly forgettable. I am glad to see there is room for theatrical releases of movies like this, but I also wouldn’t have been surprised to see The Lost City show up as a streaming-only release on Netflix.

The 4K Ultra HD release of The Lost City comes with a digital copy, though sadly no Blu-ray or DVD. What it lacks in various ways to watch the film, the release makes up for in special features on the disc itself. There are over 50 minutes of bonus content which includes deleted scenes and bloopers that are occasionally more amusing than the jokes in the film itself. There are also a handful of promotional featurettes covering key sequences in the film and the stars themselves, though they are mostly just surface and self-praising. The main reason for the 4K package is the high dynamic range in the presentation, which is as good as you will get outside of a movie theater.