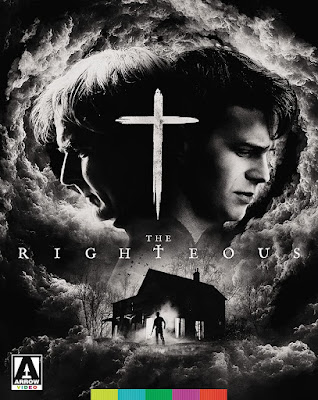 The Canadian psychological thriller The Righteous isn’t so much frightening as it is a suspenseful meditation on faith and religion, which is what leads me to believe filmmaker Mark O'Brien was likely inspired by the work of Ingmar Bergman. There are also many narrative similarities to Carl Theodor Dreyer’s 1955 film, Ordet. While these are admirable reference points, they may not be solid selling points for the average modern film viewers, who often expect a bit more clarity and spectacle. But for those who enjoy thoughtful and ambiguous cinema, The Righteous may be a welcome relief from dumbed-down Hollywood blockbusters and entries into shared cinematic universes.

The plot of The Righteous follows a former priest named Frederic Mason (Henry Czerny) and his wife Ethel (Mimi Kuzyk) as they come to terms with the untimely death of their only child. Shortly after the funeral of their daughter, Frederic comes across a young man named Aaron Smith (played by O’Brien) who is injured and lost in the woods surrounding their remote home. Although Ethel is initially concerned when Frederick brings the mysterious young man into their home to heal, the older couple eventually begin to bond with Aaron. This changes when Aaron makes outrageous claims and demands to Frederick, which imply he may have supernatural abilities connected either to God or the Devil.

Much of the film involves conversations about faith and life choices that Aaron has with Frederick at night when Ethel is sleeping. Frederick in turn begins to question what he knows to be true, both about his own life and the faith he has placed in religious beliefs. This leads to more conversations between Frederick and other characters, all building up to a few brief moments of suspenseful action and a decision which will change his and Ethel’s life, one way or another. The choice placed at Frederick’s feet also bears some resemblance to decision that must be made by the protagonist of Yorgos Lanthimos’s The Killing of a Sacred Deer, though the themes are slightly different.

Essentially taking place in a single location with a dialogue-heavy plot, black-and-white cinematography, and an ambiguous ending, The Righteous almost defiantly chooses an artistic approach over an entertaining one. While some viewers may find this a refreshing approach, others are likely to be bored and/or frustrated. While I appreciated the boldness of the filmmaking, I can’t say I have a burning desire to watch The Righteous again any time soon.

The Arrow Films Blu-ray release of O’Brien’s debut feature offers a polished presentation of the stylish black-and-white photography, even if much of the movie just contains scenes of people talking. The Blu-ray also contains the original 5.1 DTS-HD master audio, and a great deal of attention given to the packaging. There is a reversible sleeve with newly commissioned artwork by Grant Boland and Oink Creative, along with the original poster design on the opposite side. The package also comes with a booklet insert that has statements on the film from O’Brien and producer Mark O’Neill, cast and crew info, and an essay on the film by Sean Hogan. Production stills from the movie add even more to the booklet insert.

Additional special feature on the disc include the following: