Symphony For a Massacre Blu-ray Review 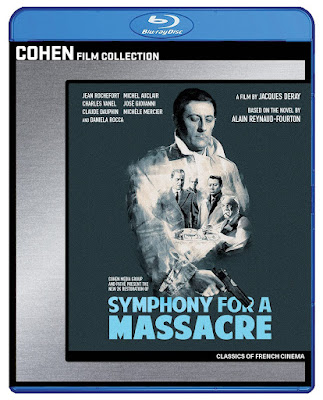 Symphony For a Massacre is an early 1960s French film noir that has all the seedy pleasure of the American counterparts, though it takes its time to unravel them. It is a sophisticated film about the cruel violence of men willing to betray their allies for a price. The simplicity of the storyline is what makes it so effective, and also provides director Jacques Deray plenty of time to build the suspense and outline the methods of betrayal with intricate details.

The storyline begins with a plan by five men to purchase a large sum of illegal drugs in hopes that it will set them up for life. In order to make the deal, they must pool their money for the large purchase. Valoti (Claude Dauphin) uses the money from his casino to pay his portion, but Clavet (Michel Auclair) is unable to raise the funds and resorts to including counterfeit bills, much to the frustration of his wife Madeleine (Michele Mercier), who worries about the risks involved. The trustworthiness of Jabeke (Jean Rochefort) is also brought into question when it is revealed that he is secretly having an affair with Valoti’s wife, Hélène (Daniela Rocca).

Once the money has been collected, Paoli (Charles Vanel) is designated as the one to travel by train to pay for the drugs. What he doesn’t realize is that one of the other five men has put a plan into place to steal the money before he reaches the destination. This betrayal leads to death, and further murders are carried out to ensure the plot remains covered up. The audience is clued into the guilty man and allowed to marvel at his coldly calculated moves, wondering all the time how it will finally be resolved.

The gorgeous black-and-white cinematography of Symphony For a Massacre is restored in 2K from a 4K scan of the surviving 35MM interpositive for the new Blu-ray release for the Cohen Film Collection. The special features with the release also contains a re-release trailer and a 28-minute evaluation of the film.