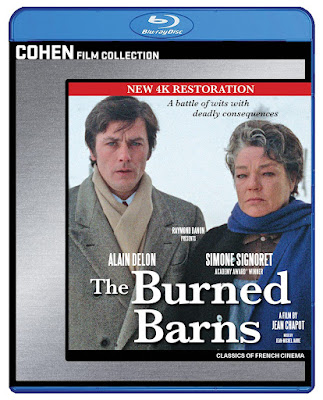 The setup for The Burned Barns promises a provincial murder mystery and police procedural following the investigation into the crime. While it does trace the inquiry of a judge into those who may be involved, the film remains more focused on how this investigation affects a slightly dysfunctional family living on a farm near where the body is discovered. Despite solid acting, The Burned Barns is somewhat disappointing in its refusal to supply the audience with expected elements of a murder mystery. The investigation holds some interest, which is all but dissolved by the unsatisfying resolution. As a character study, the film is adequate. As a murder mystery, it is a failure, regardless of the pedigree of the cast.

When the body of a young woman is found in the snowy French countryside bordering Switzerland, judge Pierre Larcher (Alain Delon) is brought in to solve the crime. The focus of his investigation remains on the family who own the property, led by matriarch Rose (Simone Signoret). While Rose cooperates with the investigation, there are areas of her family’s life which she tries to keep hidden, leading to even more suspicion of their possible involvement.

Rose has two sons, both of which she encouraged to marry, with problematic results. Paul (Bernard Le Coq) is immediately a suspect of the police because he happened to pass by the body on his way home from an evening drinking, brought on by his troubled marriage to Monique (Miou-Miou), who just happens to work at the hotel Larcher is staying at during the investigation. Louis (Pierre Rousseau) and his wife Francoise (Catherine Allégret) lead a comparatively quieter life, making them appear less likely to have been involved in the crime.

The one thing I will say about the mystery at the center of The Burned Barns is that I was never able to figure it out, despite it seeming obvious at numerous times throughout the film. Instead, these assumptions are what seem to be more important, to the family as well as the audience. We are meant to become engaged by the family dynamics, and though this may be possible due to the strength of the performances by the cast, it doesn’t detract from the disappointment of the narrative resolution.

The Blu-ray release of The Burned Barns includes a 4K restoration of the film, which is a welcome treatment given the cinematic locations. There is also a bonus feature of 25-minutes worth of interviews with crew members from the production. A large portion of this seems to be preoccupied with how troubled the production was, primarily because of the major stars involved and how their egos and personalities clashed. This may have affected the production, but the end result of the acting is accomplished, despite the story’s failings.