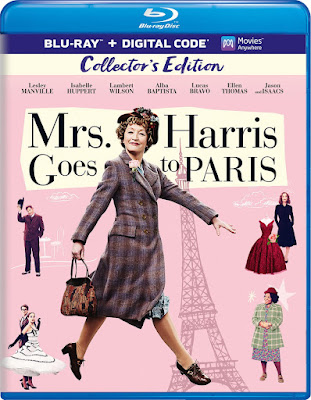 I’m torn when it comes to Mrs. Harris Goes to Paris, like the seam of a well-worn piece of clothing. On one hand, narratives with older female protagonists are rarely found onscreen and its mere existence is deserving of some praise. On the other hand, I found myself longing for more nuance and depth in the story itself. Mrs. Harris Goes to Paris is good-natured enough and has a solid message, not to mention spectacular production design, but every moment felt a little too predictable and contrived. I wish the feel-good moments had been better earned with a screenplay as detail oriented as the film’s performances and costumes.

Based on Paul Gallico’s 1958 novel, Mrs. Harris Goes to Paris follows London-based widowed cleaning lady Mrs. Ada Harris (Lesley Manville), whose everyday existence is picking up after wealthier people’s messes. After seeing one of her client’s haute couture Dior dress, Mrs. Harris becomes determined to own one of her own. She saves money, gambles, and eventually has more than she needs after receiving backpay for a war-widow's pension. Encouraged by her best friend (Ellen Thomas), Mrs. Harris decides to travel to Paris to purchase her very own Dior dress.

If it were as simple as buying a dress, this film would not be very long, so there are predictable obstacles when Mrs. Harris finally arrives in Paris. Although she is able to find her way into the Dior building, the working-class woman is initially met with disdain and derision by the Dior director, Claudine Colbert (Isabelle Huppert). This obstacle is quickly outweighed by the positive relationships Mrs. Harris simultaneously develops with the company’s accountant, André Fauvel (Lucas Bravo), and top model, Natasha (Alba Baptista). Mrs. Harris also finds a suitor in widow and Dior client Marquis de Chassagne (Lambert Wilson).

The entire endeavor is entirely wholesome and sweet. Even when bad things happen to Mrs. Harris, you can be sure it will be overcorrected with an unbelievable amount of good fortune. And this is also part of the problem. The obstacles feel contrived, as do the overly positive resolutions. Everything just seems destined to succeed for Mrs. Harris, which makes the problems feel that much more forced. For those who just want something unchallenging and sweet, you could do worse than Mrs. Harris Goes to Paris. But I would argue that you could also do better.

Part of my compliant with the film is that it feels rushed, leaving me longing for more character development between events. This is addressed slightly in the Collector’s Edition Blu-ray, which comes with extra footage in the special features. There are deleted scenes as well as extended versions of ones included in the film. The extras also include a gag reel, which is a fun addition to show the cast was having a good time while making the movie.

The Blu-ray itself is also a welcome choice for viewing the movie, as the high definition highlights the spectacular work done to bring the period’s fashion to the screen. The set design and all of the props are also wonderfully executed. For those who merely enjoy period films for the production design, Mrs. Harris Goes to Paris has plenty to offer. Along with the Blu-ray disc, the Collector’s Edition also comes with a code for a digital copy of the film.