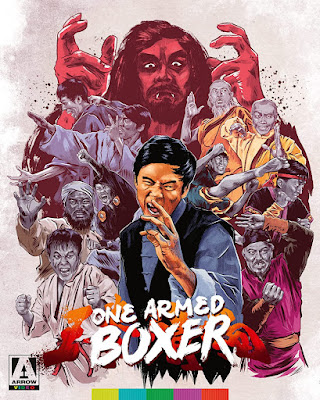 After starring in the highly successful One-Armed Swordsman (1967) at Shaw Brothers Studios, Jimmy Wang Yu transitioned to directing. Although he initially made films for Shaw Brothers, including The Chinese Boxer (1970), Yu left the studio to make films for Golden Harvest, a rival studio formed by veteran Shaw Brothers film producers Raymond Chow and Leonard Ho. Golden Harvest may be best known for producing Bruce Lee’s films, but they had their first major success with this kung fu classic.

Shifting away from the weapon-heavy films of Shaw Brothers, One-Armed Boxer is essentially a re-imagining of One-Armed Swordsman with hand-to-hand combat taking the focus. The film focuses on Yu Tian Long (Jimmy Wang Yu), the star pupil of the Ching Te martial arts school who loses an arm in a battle with the crime syndicate known as the Hook Gang. When Hook Gang boss Shao Laoliu (Yeh Tien) feels slighted by an altercation Yu has with his henchmen, he gathers master fighters from various foreign forms of martial arts to get revenge. Ching Te’s master Han Tui (Ma Kei) initially tries to avoid a battle by punishing Yu for his part in the conflict, but this is not enough for Shao. The inevitable showdown leaves Yu without an arm, and the rest of his school slaughtered by the Hook Gang and their hired assassins.

Recovery and training sequences are almost as important as the fights in classic martial arts movies, and Yu must go through this process in order to learn how to fight with one arm. Despite a belief that a martial artist losing a limb means an end to their fighting abilities, Yu takes extreme measures to learn how to fight with one arm. He does this by making his remaining arm stronger by destroying all the nerves in it, and taking an elixir provided by a woman and her father who have expertise in medicine. More than skill, Yu suddenly has superhuman strength from this process, able to punch through blocks of concrete.

What One-Armed Boxer lacks in plot and character development, it makes up for in non-stop action. The final act of the film is simply Yu battling against the Hook Gang’s many foreign assassins. This is a display of various martial arts styles, more than anything. The fighters consist of two karate experts and teacher, a Judo master, a Taekwondo master, two Thai boxing fighters, a Yoga expert, and two Tibetan lamas. Each style is showcased in some truly wacky sequences, often defying the laws of gravity among other things. Editing and choreography are endlessly entertaining, even when they lack believability.

The special edition Blu-ray release of One-Armed Boxer by Arrow Video features a high-definition presentation and 2K restoration of the film, with the original lossless Mandarin mono audio (with optional English subtitles), as well as the original English dubbed audio. The package itself features newly commissioned artwork by Ilan Sheady, which is on the carboard cover sleeve as well as the double-sided insert sleeve. The original artwork is on the opposite side of the sleeve for purists. Inside the package is a booklet with cast and crew lists, info about the transfer, and essays by David West and Simon Abrams. Special features on the disc include the following: