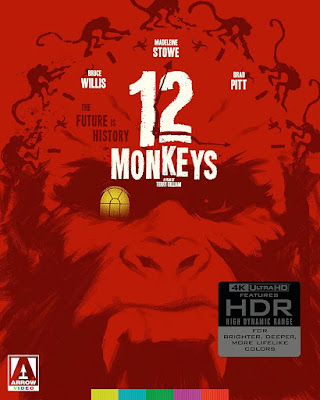 Terry Gilliam is a director who has had as many film failures as he has successful ones. Even when praised for his unique voice and style, Gilliam’s releases have often been met with box-office trouble. Unfortunately for his career, the biggest failures have been the films that also had the largest budget. When 12 Monkeys was tested prior to release, audiences were unsatisfied with the film, and it looked to be another failure. Shockingly, Gilliam was able to release the film as he had imagined, and it was a surprise success.

Not quite as surprising is the relevance which remains in the visionary director’s re-imagining of the short film, “La Jetée.” Perhaps now more than ever this apocalyptic vision of the future has relevance. Although the film largely takes place in the 1990s (when the world apparently ended, in a manner of speaking), the chaotic society of fear and disease seems still able to mirror the world we live in today. Watching the quarantine aspects of 12 Monkeys’ storyline amidst continued efforts to contain the Covid virus is haunting, to say the least.

The film begins in the future, after the civilization of humanity has all but perished, forced to live underground due to a highly contagious deadly disease. The future earth is ruled by the animals on the surface, who are immune to the virus that caused humans to go into hiding. James Cole (Bruce Willis) is simply one of many men kept in cages for experiments. He is sent to the surface and then later given the task of time travel, all so that he might discover a clue that will help the future society to find a cure of some sort.

When he arrives in 1990, Cole’s tales of a future apocalypse quickly find him put away in a mental asylum. Within the asylum he meets Jeffrey Goines (Brad Pitt), a man who claims to be the son of an extremely important man, despite his mad ravings. Cole is given a psychiatrist Kathryn Railly (Madeleine Stowe), who is amazed to find that his story may be true after he vanishes, only to appear again in 1996, the actual year of the supposed disaster.

There is something of a mystery in regard to the way that the world ends, and who is to blame. In a dream which bookends the film, there are hints that the man responsible could be Jeffrey, but there is also a futility in the effort to stop the disaster which simply adds to the madness of the film. The performances are all dead-on, slightly over-the-top while completely fitting the chaotic storytelling which Gilliam plans for this apocalyptic journey into the future.

Arrow Video’s 4K Ultra HD release of 12 Monkeys contains a brand new 4K restoration from the original film negative, approved by Gilliam himself. The UHD Blu-ray contains Dolby Vision and lossless DTS-HD Master Audio. The release comes with original artwork used for the cardboard sleeve and the reversible cover, which has the original artwork on the opposite side. Additionally, there is a booklet insert containing an essay by Ian Christie, author of Gilliam on Gilliam, and another by film critic Nathan Rabin.

Special features are also included on the disc itself. There is a commentary track with Gilliam and producer Charles Roven, taken from the film’s original release. Additionally, there is the feature-length making-of documentary, The Hamster Factor and Other Tales of Twelve Monkeys. The final special feature is a 1996 filmed interview with Gilliam by critic Jonathan Romney from the London Film Festival.