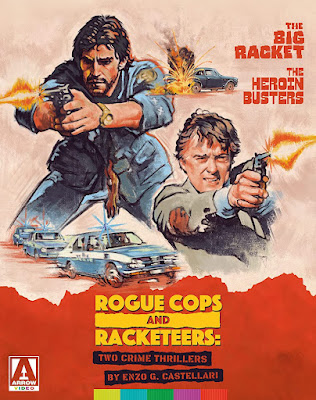 Well known is the Italian western genre that was popularized in the 1960s and 1970s, even resulting in Italy temporarily surpassing Hollywood in film production. While Spaghetti Westerns were popularized worldwide, thanks in part to American stars like Clint Eastwood, the poliziottesco (sometimes referred to as “Macaroni Crime”) films were less successful exports. Often containing themes of corruption that had parallels in modern Italian society, these crime films were more popular in Italy than elsewhere, despite a high level of violence and similar exploitative elements to those found in the Spaghetti Western genre.

Although there are certainly elements of corruption and political instability in these two Italian crime films from Enzo G. Castellari, the primary focus of the director seems to be thrilling storytelling. Violent action, explosive showdowns, and creative camera work always seems to take priority over a social message. These are distinctly Italian films, but one can see the influence from American crime films like The French Connection within the simple storylines.

The first film in the set is The Big Racket, a 1976 Italian poliziottesco following Inspector Nico Palmieri (Fabio Testi) in his battle against the organized crime racketeering schemes. Rather than just pushing the larger institutions for protection money, the criminals of an Italian city start going after the small shop owners. Palmieri does what he can to get to those responsible, causing him to be attacked and eventually have his career destroyed. Seeing the destruction caused by the criminal corruption in the city, Palmieri decides to take matters into his own hands by forming a posse made up of citizens victimized by the gang.

Although clearly a crime film, it is easy to see the influence of the Italian western genre in The Big Racket’s plot, especially in the final showdown. When local law and justice fail the people, they must use violence to eliminate the threat themselves. As cynical as this depiction of society may be, it makes for an explosive climactic showdown that Castellari considered among the best in his career.

The Big Racket special features include:

The second film in the set is The Heroin Busters, a 1977 film also starring Fabio Testi. In this slightly more convoluted story, Testi stars as undercover cop Fabio, who is determined to break any rule to take down a drug smuggling ring. Partnered with Interpol agent Mike Hamilton (David Hemmings), the pair try to uncover the truth about the international criminal organization based out of Rome.

Given that the film withholds the true motivations of multiple characters and the way the narrative jumps from location to location, The Heroin Busters lacks the straightforwardness of The Big Racket, and also lacks the same emphasis on spectacle. There are some good chase scenes, but nothing coming close to the action contained in the finale of The Big Racket. There are simply too many characters and loose threads in The Heroin Busters, which can often make it something of a chore to watch.

The special features on the disc include: