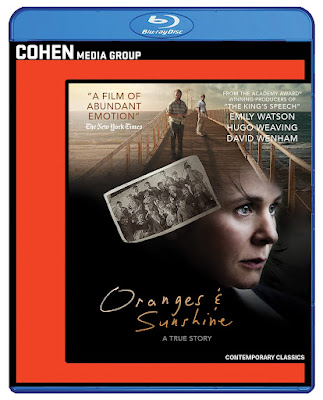 Bringing true stories to screen can be a delicate balancing act, with a dedication to accuracy expected alongside the need to keep the audience entertained. In trying to achieve both, Oranges and Sunshine feels somewhat perfunctory. It doesn’t help that the tragedy is so large in scope, and the decision to view the events entirely through a second party only creates more of a distance for the audience. As a celebration of social worker Margaret Humphreys, Oranges and Sunshine is a success, thanks to Emily Watson’s performance. Unfortunately, it fails to capture the full scope of the case she is best known for.

Oranges and Sunshine is based on Humphreys’ 1994 book, Empty Cradles, which traces her discovery as a social worker in Nottingham in the 1980s. Approached by victims of the “home children” scandal, Humphreys discovered a scheme by the British government to deport unwanted children from England to Canada and Australia in the 1960s and 1970s. As Humphreys uncovers a large number of middle-aged survivors of this scheme, she works hard to connect them with their past, despite the unexplained resistance by many.

This is part of the problem with Oranges and Sunshine, likely because of the fact that it was adapted from Humphreys’ book. We never get more than her perspective, leaving many of the outside perspectives a mystery. I would have liked to empathize more with the victims than the social worker helping them. I would have liked to understand the anger many felt and directed towards her, because there was no context to understand it in the film’s narrative. What we get is a one-sided, unbalanced presentation of Humphreys’ experience, but I would argue that the focus should have been on the events rather than the discovery. This is especially true since the film does little to engage us in the work the social worker is doing, and instead seems to just give us unexplained obstacles as a way to manifest sympathy for her struggle.

Oranges and Sunshine was the directorial debut for Jim Loach, son of legendary filmmaker Ken Loach. While you can tell he is following in his father’s footsteps, Jim seems to just be going the expected motions of kitchen sink realism. In reality, in Jim’s hands Oranges and Sunshine more like a graduate school essay than a piece of art. There are interesting facts, but they feel lifeless beyond Watson’s performance, which also seems intentionally understated.

The Blu-ray release of Oranges and Sunshine comes with a making-of featurette. This includes interviews with the cast, as well as Loach and screenwriter Rona Munro. There is also a trailer gallery.